Marine Grunts On The Corps’ First-Ever Female Infantry Leader: ‘She’s One of Us’

Editor’s Note: This article by Gina Harkins originally appeared on Military.com, the premier source of information for the military and veteran community. The first... 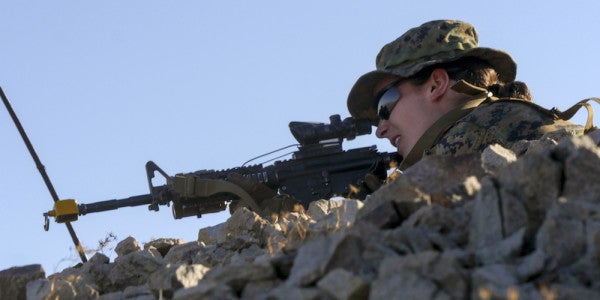 The first woman to graduate from the Marine Corps' notoriously grueling Infantry Officer Course is now leading a platoon of male grunts in Australia.

First Lt. Marina Hierl is the only female Marine to lead an infantry platoon in her service's history. About a year after she reported to Echo Company, 2nd Battalion, 4th Marines, the novelty of it all has worn off a bit — and she's even left some male grunts rethinking their opinions about women in the infantry.

That's according to a new report fromThe New York Times, which recently observed Hierl training her platoon in Australia's Northern Territory. The grunts are deployed there as part ofMarine Rotational Force — Darwin, which spends half of every year Down Under.

The 24-year-old lieutenant from Bethlehem, Pennsylvania, told the Times she didn't know much about the military before joining the Marine Corps. What she did know is that she wanted to do something important with her life.

“I wanted to be part of a group of people that would be willing to die for each other,” Hierl said.

When former Defense Secretary Leon Panetta announced during her sophomore year of college that the policy barring women from serving in the infantry would be lifted, Hierl said she knew what she wanted to do.

“I wanted to lead a platoon,” she told the Times. “I didn't think there was anything better in the Marine Corps I could do.”

But not everyone was convinced she had what it takes to lead 38 infantry Marines. Others in Echo Company have made sexist cracks about her platoon, The New York Times reported. But those reporting directly to her, even if skeptical at first, quickly recognized her capabilities.

Twenty-year-old Lance Cpl. Kai Segura is one of those Marines. In an interview with the Times, he recalled Hierl's speed when leading her Marines back from an exercise in California's Mojave Desert.

Infantry Marines are often leery of any new lieutenant who comes in to lead their platoons, but Hierl quickly showed they were going to have to keep up with her — not the other way around.

“She's one of us,” Segura told the Times.

Hierl is one of just two women who've completed the Infantry Officer Course; 37 have attempted it.

She'll continue operating with 2/4, which includes two enlisted female infantry Marines, in Darwin until the fall. Read more about Hierl's platoon and what they've been up to on their Australian rotationhere.