The Marine Corps recently fielded its new M320A1 grenade launcher to Marines at Camp Lejeune, North Carolina, bringing the service closer to its goal of equipping all infantry units with the side-loading 40mm weapon in fiscal 2021 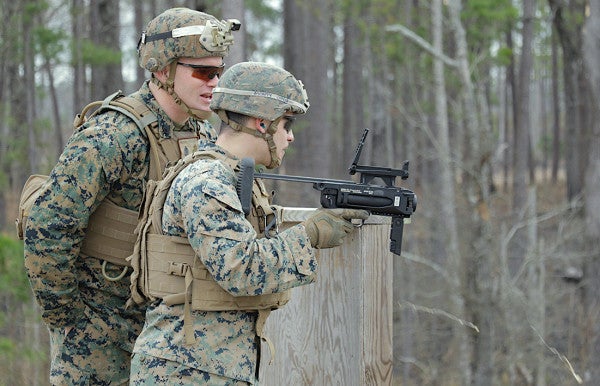 The Marine Corps recently fielded its new M320A1 grenade launcher to Marines at Camp Lejeune, North Carolina, bringing the service closer to its goal of equipping all infantry units with the side-loading 40mm weapon in fiscal 2021.

The Heckler & Koch-designed M320A1 is set to replace all the Corps' Vietnam-era M203-series grenade launchers by the fourth quarter of fiscal 2024, according to a recent news release from Marine Corps Systems Command.

“Reloading it and unloading it are easy compared to other systems we've had in the past,” Gunnery Sgt. Jason Wattle, squad adviser for the Infantry Small Unit Leader course, said in the release.

Marines learned how to assemble, dissemble and troubleshoot the weapon, before participating in live-fire exercises.

The U.S. Army first began fielding the M320 in 2009 and later upgraded to the M320A1, which is designed to be mounted under the M4 carbine. Colorado company Capco, Inc. first received a $32 million contract in 2015 to manufacture the weapons.

Grenadiers load and unload the M320A1 from the side of the weapon rather than from underneath it, compared to the M203A2, a “major advantage because the breach of the weapon is clearly visible and the shooter can more easily load while in the prone [position],” Capt. Nick Berger, MCSC project officer for the M320A1, said in the release.

“Additionally, if the Marine experiences a misfire and the round must be removed from the barrel, it is safer to have the barrel release from the side and retain the ammunition than to have it release and potentially fall to the ground,” Berger said.

The M320A1 has a maximum effective range of 150 meters on a point target such as a window and a 350-meter max effective range on an area target, according to the Army's technical manual for 40mm grenade launchers.

MCSC worked with its Advanced Manufacturing Operations Cell (AMOC) to speed up the fielding process, according to the release.

The AMOC is equipped with 3D printers, which helped quickly manufacture the special hammer strut tools needed for removing the launcher's trigger assembly, it added.

The manufacturer is still required to produce the parts, but the program office chose to expedite this process with a 3D-printable version of the tool to field the system ahead of schedule, according to the release.

“Without AMOC's assistance, Marines couldn't have maintained the system if it broke and [the Program Manager for Infantry Weapons] would have had to limit the number of weapons we put in the hands of fleet Marines,” Berger said in the release. “Thanks to AMOC, more than a dozen infantry battalions, [School of Infantry East], [School of Infantry West] and The Basic School will all receive M320A1s this fiscal year.”