It looks like a US Marine bought a fire truck. And yes, that’s totally allowed

Turns out you can totally buy a fire truck and drive it around base, assuming you have the appropriate license, insurance, and don't mind being stopped by the Duty NCO every five minutes. 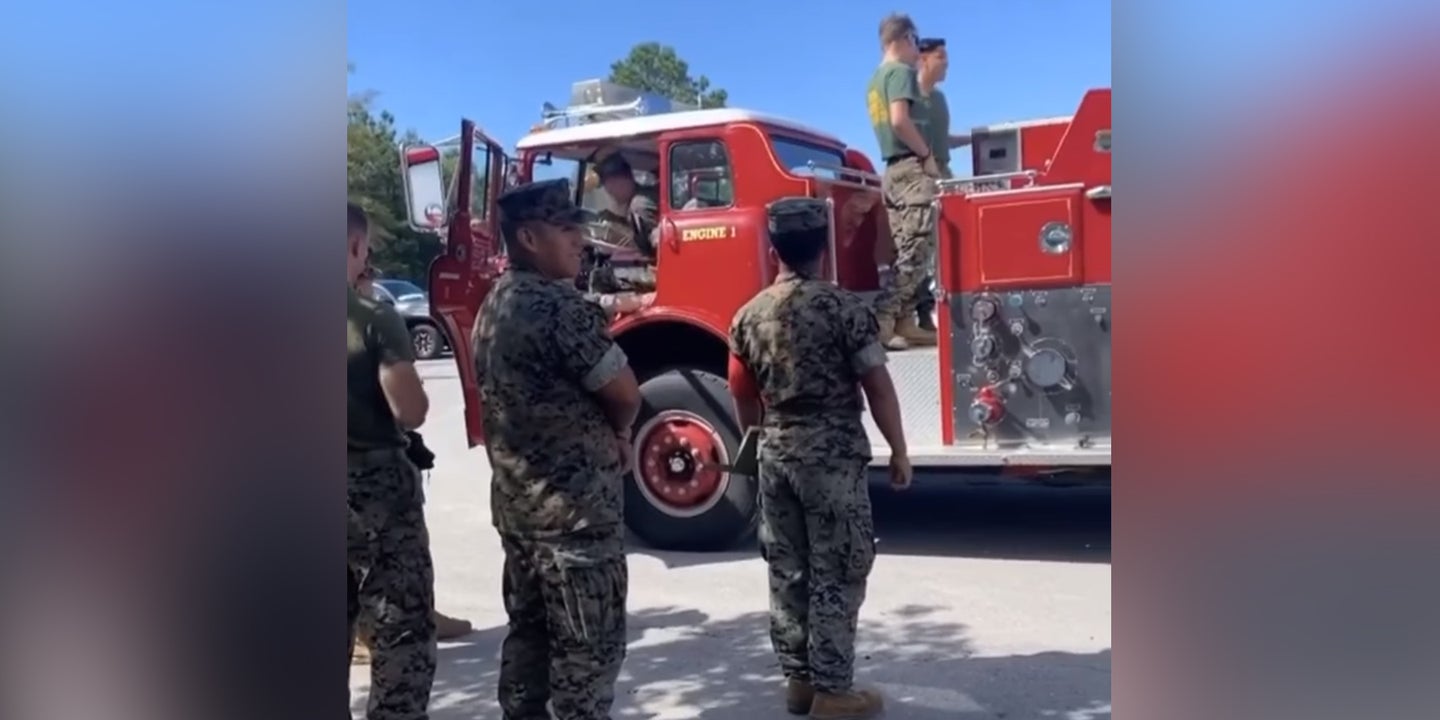 Sometimes you see something so stupifying and silly that all you can do is stare blankly and think “yeah, I’m pretty sure a Marine did that.”

Well, yesterday was one of those days:

The video was first shared earlier this week by Terminal Lance, the prominent Marine-focused webcomic, which appears to show a group of Marines gathering around a fire truck that one of them purchased and then drove onto base and to the barracks to proudly show off.

It’s unclear who the owner of the vehicle is in the video, but the awe on the other Marines’ faces is palpable.

“Fuck, I wish I’d thought of that,” one Marine’s expression seems to suggest. While another, who appears to be on duty and tightly clutching a logbook, gives off a very “how exactly am I gonna report this” vibe.

The video quickly racked up comments from readers on Twitter, Facebook, and Instagram, many of whom suggested the fire truck in question was on Marine Corps Base Camp Lejeune, North Carolina.

“Brooooo I saw this thing leaving Lejeune the other day when our fire alarm went off,” one person wrote on the Instagram post. “Was confused as to why a truck was heading away from an alarm lol.”

Others voiced concern that the Marine might face some kind of punishment — though for what exactly is unclear. And that’s kind of what makes this so damn funny. There’s nothing improper about buying a fire truck. It’s weird, sure, but it doesn’t hurt anyone. Yet it just seems so eccentric, that it must be in violation of some random Marine Corps order — after all, we’re talking about the organization that forbids you from walking on grass.

So, we here at Task & Purpose decided to ask, and you know what? Turns out you can totally buy a fire truck and drive it on base:

“I asked our base fire chief to have a look at the video and he confirms this fire truck is not a Camp Lejeune asset, and he is very confident that it is not an asset of our local community fire and emergency services partners, based on the year model,” Nat Fahy, a Marine spokesman for Camp Lejeune, told Task & Purpose.

“If it’s a privately owned, registered and insured vehicle, and the Marine holds the appropriate state driver’s license to operate it, there would be no restrictions prohibiting a Marine from driving it on base,” he said. “The video does appear to be taken at Camp Lejeune based on the style of barracks buildings in the background.”

And the best part is: This isn’t even the first time this has happened, as the page administrators U.S. Army WTF! Moments, a popular military social media community, reminded folks on Thursday:

There was a funny video from Terminal Lance yesterday about a fire truck at the barracks but was not the first time that has happened. Back in 2017 we had the below video. Once again the Army leads and the Marines follow. pic.twitter.com/NbPtFdUNIV

Still, there are so many unanswered questions. Why did that Marine buy a fire truck? How much light beer can that thing hold, and does it come out at a “drinkable” velocity? How much did it cost? And what was the APR?

If you are, or happen to know, the living legend who bought this big red beast of belligerence, please reach out and tell us your story: James@taskandpurpose.com.

Related: Camp Lejeune warns Marines and sailors to stay away from dangerous wildlife, because of course that had to be said