A Marine stationed at Camp Pendleton became the first woman to graduate from the Corps' Howitzer Section Chief Course this month, taking on a combat artillery leadership role once reserved for men 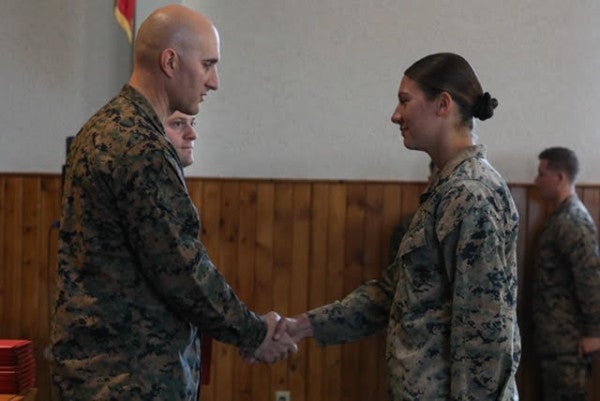 A Marine stationed at Camp Pendleton became the first woman to graduate from the Corps' Howitzer Section Chief Course this month, taking on a combat artillery leadership role once reserved for men.

The M777 Howitzer is a cannon that can hit targets from almost 20 miles away. It requires a crew of at least six Marines to fire.

As a newly-minted section chief, it will be the job of Cpl. Julianna Yakovac, 21, of 1st Battalion, 11th Marine Regiment, to lead such a crew.

“These (noncommissioned officers) are expected to run a gun crew of 8-10 Marines and are responsible for every bit of technical knowledge associated with emplacing, firing, movement, and local security around that howitzer,” Tumanjan said in a statement.

Yakovac said she does not see herself as a trailblazer. In an interview with the Union-Tribune, she was quick to credit her team for where she is now.

“I (am) very fortunate to be part of a great unit,” Yakovac said Thursday. The Marine, originally from Olympia, Washington, had just returned from field exercises at the Marine Corps Air Ground Combat Center in Twentynine Palms.

“I wouldn't say I'm a trailblazer — when I joined I didn't have that intention,” she said. “I'm just happy to have the same opportunity everyone else has. It's not any more of an accomplishment than my male counterparts.”

While Yakovac downplays the significance of what she's doing, it's not the first time she's made news. She also was featured in a 2019 CBS This Morning story about women serving in Marine Corps combat jobs.

The Marines, under orders from then-Defense Secretary Ash Carter, opened combat jobs to women in 2016. Men make up more than 90 percent of the Corps, which is the largest gender disparity of all military branches.

When she joined, Yakovac said, she didn't know there had been any restrictions or that rules had changed — she just wanted to be in the field. When she found out she'd be firing artillery, she was thrilled.

“It was extremely exciting,” she said. “It's been more exciting as I've gone.”

Yakovac said that when she reported to her unit she was one of two women there, but now, two years later, there are a lot more.

She said her male counterparts have been great teammates.

“I've been fortunate to have great experiences,” she said. “I've never been talked down to; I've been built up.”

There was early resistance in the Marines to opening some of the combat jobs to women. In 2015, concerns over unit cohesion and physical demands led the Marines to request that some combat roles remain exclusively male.

Now all combat occupations are open to women.

On Feb. 21, Marine Gen. David Berger, the commandant of the Marine Corps, announced on Twitter that the Marines will begin to prioritize filling infantry leadership positions with women, even if that means bringing those who've left active duty back into the ranks.

He also said the service will look into establishing one-year paid maternity leave.

“These are some of my most important matters for immediate execution,” Berger tweeted.