Marines’ obsession with pull-ups may be hurting the Corps, according to a new study

Marines are putting an "extreme emphasis" on the number of pull-ups leathernecks can do, a recently published internal study found. And that, some fear, could result in other important qualities that are vital to the Corps' mission being overlooked. 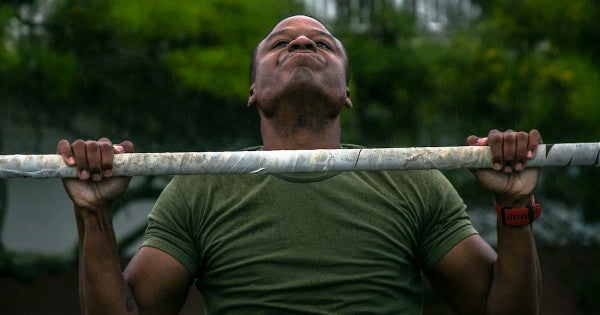 Marines are putting an “extreme emphasis” on the number of pull-ups leathernecks can do, a recently published internal study found. And that, some fear, could result in other important qualities that are vital to the Corps' mission being overlooked.

Participants in a study on Marine Corps culture were often focused on pull-ups as a best measure of a person's value and worth, researchers found. Marines' ability to lift their own body weight on a pull-up bar was “routinely what Marines referenced when discussing physical standards, a Marine's value, and physical readiness,” the report's authors wrote.

One officer interviewed for the study recalled seeing a bunch of cyberwarfare Marines — a specialty the service struggles to retain — leave the Marine Corps because they “ran 26-minute three miles and only did five pull-ups.”

“So we told them they were bad Marines,” the captain said. “But now they make six figures for Microsoft … and we don't have any of them for our future cyber fight.”

Much of the discussion in the report centered around differing pull-ups requirements for men and women taking the annual physical fitness test. The study, which was initiated after a scandal in which hundreds of male Marines and veterans were found to have shared nude photos of their female colleagues online without permission, was led by the Marine Corps Center for Advanced Operational Culture Learning.

The center interviewed hundreds during the months-long investigation. Task & Purpose first reported on the study, which found indications that “mistreatment of women is pervasive and becoming normalized” in the Marine Corps.

Pull-ups are contributing to the divide between male and female Marines, the report found. Male Marines “thought that women have an unfair advantage in how their PFT is scored,” the study states.

Researchers noted that there are arguably more important metrics that show a Marine's preparedness for combat, including the ability to shoot or performance on the combat fitness test, which requires Marines to show they can carry a colleague to safety. But Marines repeatedly cited pull-ups as a top indicator of a leatherneck's warfighting abilities, the study found.

The findings aren't leading to any training changes that would deemphasize the importance of pull-ups though, Col. Stephen Armes, director of the Marine Corps' Force Fitness Division within Training and Education Command, said.

“The pull-up is an evidence-based field test of dynamic upper body strength and endurance which incentivizes beneficial training behaviors,” he told Military.com “Additionally, performance on the pull-up has strong correlation to MOS-specific physical demands.”

Armes added that all events on both the physical and combat fitness tests are important in assessing the “variety of physical attributes necessary to sustain general health and fitness.”

One East Coast sergeant told the study's authors he had no problem with women serving in combat “if she can pull her weight.” That means doing the same number of pull-ups, regardless of gender, he added.

Until a few years ago, women did not have to complete any pull-ups to pass the Marine Corps' physical fitness test. Men were required to perform the exercise, but women were allowed to do what was known as a flexed-arm hang, which required them to hang with chin above the pull-up bar, but did not include dynamic motion.

That was set to change in 2014 until service leaders found most female recruits at boot camp weren't able to do pull-ups. The flexed-arm hang wasn't eliminated from the Marines' fitness test until 2017. At that point, men and women were also given the option to swap pull-ups for easier push-ups, though they face a points penalty for doing so.

Years later, the differing standards are contributing to a gender divide, the study found. The idea that female Marines can do fewer pull-ups than their male counterparts and get an equal score “did not sit well” with men, researchers wrote.

“Are required to meet equal physical standards? No, it doesn't take a scientist to study that,” one gunnery sergeant said. “They need to do this many pull-ups, and I need to do this many. Is that equal? No. Four and four is equal. 20 and 20 is equal. That's equal. So either we're equal, or we're not.”

Armes pointed out that the Marine Corps has gender- and age-neutral MOS-specific standards, which would require men and women in those jobs to perform the same number of pull-ups. Those don't appear to have been discussed in the report, he added.

In some cases, the researchers noted, male Marines began to express anger over the differing standards. That, they added, can be “detrimental to the Marine Corps.”

“This kind of attitude can contribute to creating and perpetuating the hostile environments that many of the female Marines discussed,” the study states.