Col. William E. Blanchard, commanding officer of the Marine Corps Detachment at Fort Leavenworth, near the Missouri-Kansas border, was relieved on June 19 following an investigation 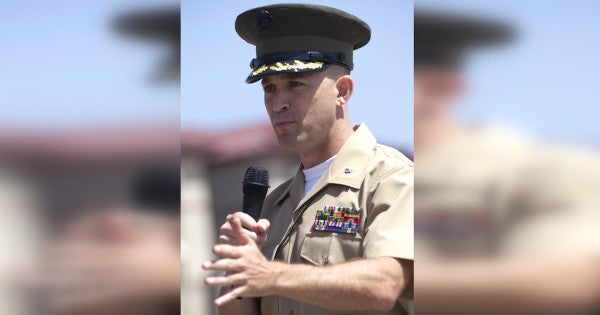 A Marine who oversaw the Corps' detachment at a Kansas Army base was removed from his post due last week, officials said on Thursday.

Col. William E. Blanchard, commanding officer of the Marine Corps Detachment at Fort Leavenworth, near the Missouri-Kansas border, was relieved on June 19 following an investigation, said Jessica Hanley, a spokeswoman for his parent command.

The decision was made by Brig. Gen. W.J. Bowers, the head of Marine Corps Education Command, “due to loss of trust and confidence in his ability to command,” Hanley said.

“The investigation is complete,” she added. “No further information is available at this time.”

Blanchard could not immediately be reached for comment. Marine officials did not immediately respond to questions about when he took command of the Leavenworth detachment. His relief was first reported by Marine Corps Times.

Blanchard is at least the sixth Marine Corps commanding officer to be relieved in just over two months. Lt. Col. James Compton, Marine All-Weather Fighter Attack Squadron 242's former commanding officer, was fired in April after his squadron was involved in a deadly refueling training mission.

Lt. Col. Francisco Zavala, was relieved in May from his job as commanding officer of 1st Reconnaissance Battalion. AndLt. Col. Nathaniel “Lips” Baker was recently relieved as commander of Marine Corps Air Station Kaneohe Bay, Hawaii, following an investigation into an off-duty incident.

The Marine detachment at Leavenworth serves the students attending the Command and General Staff College, a joint interagency college where students can complete master's degrees. The college falls under the Army University.”