CAMP PENDLETON — A general – credited with an incredible work ethic and team leadership – relinquished command of the... 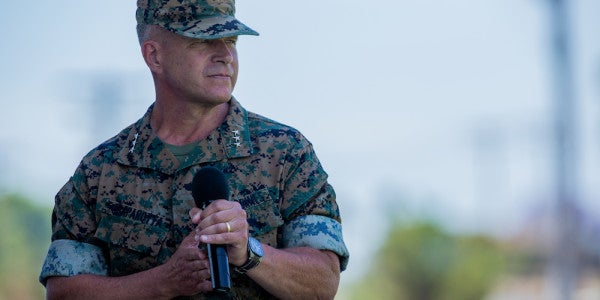 CAMP PENDLETON — A general – credited with an incredible work ethic and team leadership – relinquished command of the 1st Marine Expeditionary Force, and its some 50,000 Marines and sailors, during a change of command ceremony Monday, July 30, at this seaside base.

Call it the passing of the baton from one combat-tried infantryman to another. Call it a ceremony of mutual respect.

Lt. Gen. Lewis Craparotta, who deployed to Middle East multiple times as a commander, handed oversight of the fighting force to Lt. Gen. Joseph L. Osterman in a ceremony marked with traditions – including ceremonial flags, cannon fire and a parade of some of the force’s finest units. Osterman, a Bronze Star awardee, most recently served in Tampa, Fla., as deputy commander in the United States Special Operations Command.

Attendees at the ceremony included military brass, enlisted Marines, friends and families of the two generals, as well as civic organizations from Camp Pendleton’s surrounding cities including San Clemente, Vista and Oceanside.

Among his strengths, Craparotta was lauded for helping transition the fighting force from a focus on the fighting-style of counterinsurgencies, such as finding improvised explosive devices in Iraq and Afghanistan, to more modern threats the United States might face from countries with similar military capabilities, such as surface-to-ship missiles, locating an enemy’s missiles on the coast and amphibious assaults.

“They are global and ready,” said Lt. Gen. David Berger, commander of U.S. Forces Pacific. “They have rehearsed all the way to mobilization and embarkation, which we probably haven’t done in 15,16 years.”

Berger commended Craparotta’s vision and his ability to turn that vision into a reality.

“It takes a lot of energy and the ability to build a team,” Berger said. “Gen. Craparotta has both in spades. He has work ethic and knows how to build a team. The (Marine Expeditionary Force) is the largest Marine Air Ground Task Force we have. It’s the most capable, the most lethal and now it’s the most ready.”

Craparotta took over the expeditionary force in 2016 after serving as commanding general of the Marine Air Ground Task Force Training Command and Marine Corps Air Ground Combat Center in Twentynine Palms. He leaves Camp Pendleton to become the commander of the U.S. Marine Corps Forces Pacific in Hawaii.

He thanked the Marines and sailors who served with him. He also spoke to their families.

“It’s about the team, it’s about all the Marines and sailors that served in this (expeditionary force) that put their best foot forward everyday,” he said. “Across the staff, from the colonels down to the lance corporals and the PFCs. I’d also like to acknowledge their families.”

After the ceremony, the two generals greeted their guests – including chatting with Carla and Jim Hogan, Gold Star parents from San Clemente.

The Hogans founded Socks For Heroes after the death of their son, Lance Cpl. Donald J. Hogan, in Afghanistan in 2009. The group, which works to improve the lives of Marines deployed in harsh environments, has sent 573,000 socks to Marines deployed overseas.

“He was a great leader and built on the architecture … to not only get Marines ready for today’s but also tomorrow’s fight,” Jim Hogan said. “We’ll miss him a great deal.”