The Marine Corps says human error caused a helicopter window to fall onto the grounds of a crowded elementary school... 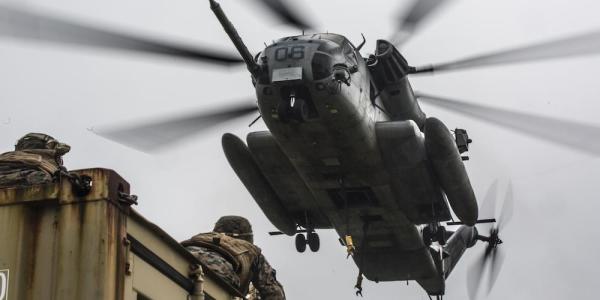 The Marine Corps says human error caused a helicopter window to fall onto the grounds of a crowded elementary school last week on Okinawa.

The incident occurred on the morning of Dec. 13 when a CH-53E Super Stallion’s window inexplicably became separated from the aircraft and landed on Futenma Daini Elementary School’s sports field, which is adjacent to Marine Corps Air Station Futenma’s fence line. More than 50 schoolchildren were playing at the time, and one boy was slightly injured from a pebble that flew up during impact.

The 1st Marine Aircraft Wing has completed a “thorough” investigation into the incident and determined it was caused by human error, officials said a statement released Monday evening.

The window, which was not properly secured before takeoff, was designed to be removed so that the crew can evacuate during an emergency, the statement said.

Marine officials said they have conducted additional training for both air and maintenance crews to reinforce proper procedures. Also, all CH-53E aircraft have been thoroughly inspected and checked for mechanical or structural issues with the windows.

“1st MAW has taken comprehensive actions to ensure the safety of all Okinawa-based CH-53E aircraft, the aircrew that fly in them, and our broader community,” the statement said. “This incident is regrettable, and we again apologize for the anxiety it has caused the community.”

Japanese officials weighed in on the incident earlier Monday, but were careful not to pass judgment until the results of the ongoing investigation were released.

Japan’s defense minister, Itsunori Onodera, told reporters he was waiting for sufficient safety measures to be imposed by the U.S. military.

“Safety can only be ensured when all possible measures are taken to prevent reoccurrence,” he said.

There had been no formal announcement by the Marine Corps about grounding the Super Stallions; however, local press reported that the helicopters did not appear to be flying from Futenma after the incident.

Marine officials did not address the resumption of flights in Monday’s statement. Japan’s Ministry of Defense declined to confirm or deny the report. Okinawa prefectural officials were unavailable for comment.

Japanese Chief Cabinet Secretary Yoshihide Suga told reporters Monday that Tokyo was working closely with the U.S. government and would publicize the results of the investigation once they had been digested and checked. Suga also said he urged the U.S. not to fly aircraft over hospitals and schools near Futenma.

Officials from the elementary school said Monday that Marine Corps officials had visited the school and apologized during a closed-door meeting.

The incident is the latest in a string of recent U.S. military aircraft mishaps on or around the southern Japanese island prefecture and has led to heightened safety concerns among Okinawa’s local population, simmering feelings of fear and anxiety that harken back to the days after World War II when mishaps were common and often claimed lives.

On Dec. 7, a plastic part thought to belong to a U.S. military helicopter landed on the roof of a local day care facility, leading to protests in front of U.S. military facilities.

In October, a 1st Marine Aircraft Wing Super Stallion made an emergency landing in a farmer’s field outside Okinawa’s Northern Training Area after an inflight fire. The aircraft was an almost total loss.

An MV-22 Osprey crashed last December in shallow water just off Camp Schwab, which was followed by a deadly Osprey crash in August off the coast of Australia that claimed the lives of three Marines.