This 100-year-old Marine vet fought in WWII and Korea. Now he’s being honored for his place in Corps history

Marine Corps Base Camp Pendleton has played a major role in military history over the past 77 years, and John Farritor is one of the rare men who has seen that history unfold from the start 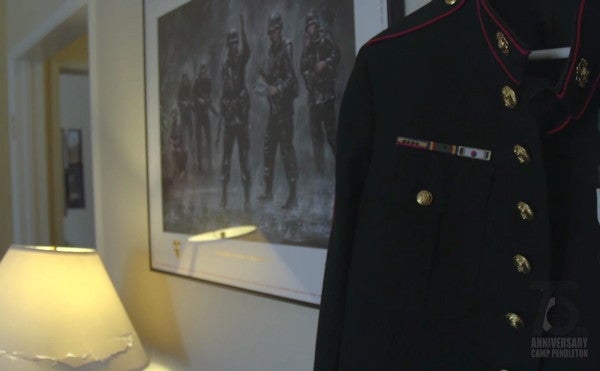 Marine Corps Base Camp Pendleton has played a major role in military history over the past 77 years, and John Farritor is one of the rare men who has seen that history unfold from the start.

The Vista, California veteran, who turned 100 on Tuesday, is one of the few surviving Marine veterans who marched 55 miles from Camp Elliott in San Diego to christen the newly opened base near Oceanside in September 1942.

He also fought with Camp Pendleton-based divisions in some of the Corps' most defining and deadly battles of World War II and the Korean War, including at Iwo Jima, Bougainville, the Pusan Perimeter, the Inchon Landing and the Chosin Reservoir.

“John was a part of history with a capital H,” said local historian Linda Dudik of San Marcos, who runs the historical website The World War II Experience. Dudik taught history for 34 years at Palomar College and has devoted her post-retirement years since 2009 to collecting and re-telling the stories of aging war veterans like Farritor.

Nattily attired in his medal-bedecked dress blues uniform and cap, Farritor was guest of honor at a birthday celebration Tuesday morning at Pacifica Senior Living in Vista, where he has lived since 2010. A group of young Marines from Camp Pendleton, as well as friends and fellow residents gathered to hear about Farritor's Marine Corps experiences in a slide-show presentation presented by Dudik, a longtime friend.

Farritor sang along to his “Happy Birthday” song and quipped to the audience: “I enjoyed the first 100 years. But I don't know what I'll do from here on out.”

He wrote about his war experiences in a 2001 memoir “Through It All: Stories from The Top.” The “Top” refers to the Marine Corps' top brass. During his 30 years in the Corps — 20 on active duty, 10 in the reserves — Farritor rose from the rank of private to first sergeant. Among his many service honors are the Navy-Marines Commendation Medal with Combat V and the Presidential Unit Citation Ribbon.

After he retired from the service, Farritor said Tuesday he didn't attempt a second career because nothing could ever top the Marine Corps.

“Being a Marine means everything to John. It is his greatest pride,” said family friend Kathryn Turner, who described Farritor as “rambunctious, cynical, sarcastic, hilarious and humble.”

Born on July 9, 1919, Farritor grew up on a 720-acre hay ranch in Broken Bow, Neb. At 13, he dropped out of school to run the ranch when his father was no longer able. After Germany invaded Poland in 1939, he wanted to join the Marines but his mother insisted he was needed at the ranch. A year later, at age 21, he finally left Nebraska and enlisted, saying that he liked the look of the Marines' uniforms and their “first to fight” mission.

In July 1941, he arrived for boot camp training at the Marine Corps Recruit Depot in San Diego, and was later stationed at Camp Elliott and, finally, Camp Pendleton, where he served in the 3rd Marine Division Field Artillery.

The division's first major battle against the Japanese began on Nov. 1, 1943, on Bougainville in the North Solomons islands, a bloody three-week battle fought in monsoon-like conditions. It was the first time Farritor had ever seen the body of a dead Marine or Japanese soldier, but he quickly grew accustomed to the sight.

“Combat is a series of highs and lows,” he wrote of his first battle experience. “In spite of the death and destruction, the highs are exciting. They fill you with lightheartedness. It cannot be explained to someone who has not been through it. During the lows, which are boring, you are sustained with the anticipation of the next high.”

The next “high” came in July 1944, when the 3rd Marine Division launched the costly but successful three-week battle to liberate Guam. More than 1,700 Marines died in the battle as well as 17,000 Japanese. Six months later, the 3rd Marines landed on Iwo Jima, a barren island where 21,000 Japanese troops were dug into tunnels and trenches on the island and on its one high point, Mount Suribachi. The 36-day battle was one of the war's deadliest, costing 6,821 American lives.

Farritor described the battle on Iwo Jima as so violent and the weapons so destructive, that many Marines were blown to bits and their body parts sunk deep in the island's black volcanic sand. On Feb. 23, he watched with great pride the raising of two American flags — the second event immortalized by photographer Joe Rosenthal — on Mount Suribachi. Then he remembers rising at dawn the next morning to make sure the flag was still flying over the hotly contested hill.

After the war, Farritor joined the 11th Marine Division, 1st Battalion at Camp Pendleton, which in September 1950 participated in the surprise amphibious landing at Inchon in South Korea. The first battle was a success, but the twin threats of invading troops from China and fierce cold and winds that at times dropped the temperatures to -34 degrees Fahrenheit, led to a horrific U.S. casualty rate. As a veteran of sub-freezing winters on the Nebraska plains, Farritor fared better than many of his fellow under-supplied and under-dressed Marines, who died by the thousands in the cold.

Their greatest test came in the retreat from the Chosin Reservoir. Surrounded and outnumbered four to one by Chinese troops, 30,000 Marines fought their way 70 miles over 17 days in an against-all-odds escape to the seaport at Hungnam. It is considered one of the defining battles of both the Korean War and Marine Corps history.

It was during this retreat that Farritor suffered his only war injury, a wound to the hand from flying shrapnel. He refused a Purple Heart commendation and, to this day, says he doesn't like being called a war hero. He says he was just a Marine getting the job done.

“When I hear people calling me a hero, I say I'm not,” he said Tuesday. “All of the real heroes were buried over there.”

SEE ALSO: The Marine Corps Doesn't Know Why It Chose 'Semper Fi' As Its Motto