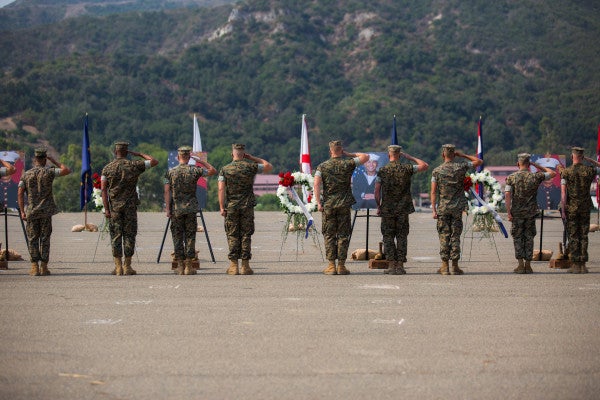 As the three Southern California Marines among the nine who died in a recent training exercise are returned to their families this week, the Marines and sailors at Camp Pendleton honored the men lost when their seafaring vehicle sank off San Clemente Island.

In a somber ceremony on a flight line at Camp Horno, the service members were remembered for their devotion and service to their country. The eight Marines and one sailor died on July 30, when their amphibious assault vehicle sank in 400 feet of water during a shore to ship maneuver.

“As our fallen hail from across this country and represent what’s finest about it, this truly is a national loss,” Lt. Col. Michael J. Regner, commanding officer of Battalion Landing Team 1/4, said in the ceremony. “Our fallen brothers honor us by the manner with which they lived their lives, and we will never forget the last time we saw them … and now we remember them as they slip their earthly bonds, to give us overwatch from on high with God.”

The quiet event began with only the sounds of boots steps from a formation of Marines that marched onto the flight line carrying the warriors’ combat gear to assemble what is known as a battlefield cross. The boots, rifle and helmet staged together with the Marines’ and sailor’s dog tags signifies the loss of a service member.

The items were placed in front of photographs of the Marines and sailor who died. Then there was a final roll call, a volley of fire and Taps played by musicians from the 1st Marine Division Band.