None of the 13 Marines recently arrested and charged in the case of an alleged human smuggling ring at Camp Pendleton are accused of transporting any unauthorized immigrants across the border, the lead investigator in the case said Tuesday. 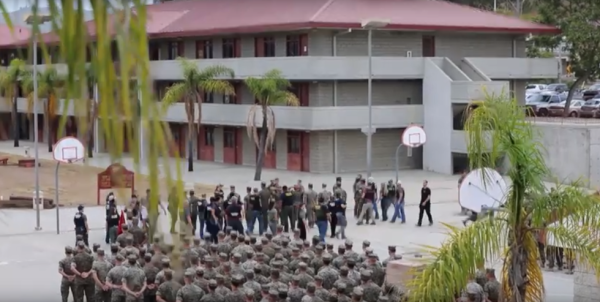 None of the 13 Marines recently arrested and charged in the case of an alleged human smuggling ring at Camp Pendleton are accused of transporting any unauthorized immigrants across the border, the lead investigator in the case said Tuesday.

They are charged based on the allegation they were part of a conspiracy to transport the immigrants across the county.

Special Agent Katelyn Thompson, of the Naval Criminal Investigative Service, testified she is the lead agent in the smuggling case, including Tuesday's hearing of accused Marine Cpl. Trenton Elliot, 27.

Elliot was among 15 Marines whose arrests in July were caught on video by a 1st Marine Division public affairs official. In total, 16 Marines were arrested that day, including one in Washington, in front of nearly 800 other Marines.

Elliot has not yet entered a plea.

Thompson testified Tuesday that a scale with cocaine residue was found in Elliot's car, as well as a backpack with guns and ammunition. Elliott's civilian attorney, Bethany Payton-O'Brien, suggested the residue and scale were not Elliot's.

Thompson said the guns were later found to belong to a sergeant in Elliot's unit who allegedly hid them in the vehicle to avoid a planned barracks search.

Besides Elliot, only two other Marines charged in the case have been named — Lance Corporals Byron Darnell Law II and David Javier Salazar-Quintero, who were arrested by Border Patrol on July 3, after agents said they saw the two pick up three unauthorized immigrants near Jacumba Hot Springs, which is close to the border in east San Diego County.

Law and Salazar-Quintero were initially charged in federal court in San Diego, but their case was transferred to the military system.

Thompson testified Tuesday that, despite the number of Marines charged with human smuggling, none were accused of smuggling anyone across the border. Instead, the alleged ring operated by transporting unauthorized immigrants from one location to another within San Diego County, she said.

Payton-O'Brien challenged Thompson on the nature of the charges.

“South of the border? No, ma'am,” Thompson answered.

Thompson also testified that authorities had no evidence of other unauthorized immigrants being transported by the alleged ring other than those allegedly in the vehicle with Law and Salazar-Quintero.

The case, Thompson said, is built around interviews with the detained Marines and evidence obtained from cell phones.

Payton-O'Brien has accused the unit — 1st Battalion, 5th Marines— of “unlawful command influence” due to the mass arrest in front of the entire unit.

Unlawful command influence is a minefield for military justice, as unit commanders have complete authority over legal proceedings and cannot, under military law, appear to attempt to influence the outcome of the case.

Thompson testified that the mass arrest was planned by her and battalion leadership — specifically its commanding officer, Lt. Col. Eric M. Olson, and the regiment sergeant major, Sgt. Major Matthew A. Dorsey.

Payton-O'Brien said during her closing argument that prior to filing her motion alleging unlawful command influence she had worked out a plea deal with prosecutors. That deal was taken off the table after she filed the motion.

That action, Payton-O'Brien said, is another example of unlawful command influence.

The prosecutor in the case, Marine Capt. Jasper Casey, declined to make an oral argument during Tuesday's hearing, opting to submit his in writing.

The hearing officer is expected to make a recommendation to the convening authority about whether to proceed to court-martial, a decision expected in the coming weeks.