Military prosecutors dropped human trafficking and drug charges against most of the two dozen Marines recently arrested in front of their Camp Pendleton battalion, days after a court ruled those arrests were an unlawful violation of their rights, Marine Corps officials confirmed Tuesday 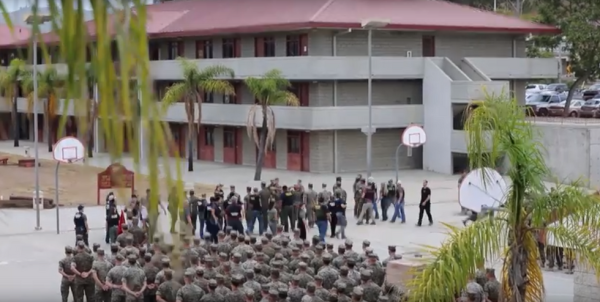 Military prosecutors dropped human trafficking and drug charges against most of the two dozen Marines recently arrested in front of their Camp Pendleton battalion, days after a court ruled those arrests were an unlawful violation of their rights, Marine Corps officials confirmed Tuesday.

The Marines' cases will be dealt with administratively, outside the military court system, according to a 1st Marine Division statement. Many of them will be discharged from the Marines.

Until now, the Marines had not answered questions or responded to requests for information about the cases by the Union-Tribune.

The arrests on July 25 were captured on video by the Marine Corps and first published by the Union-Tribune in November.

At first 16 Marines were called to the front of their unit — 1st Battalion, 5th Marines — and accused of human smuggling. They were arrested by a swarm of 40 to 50 law enforcement agents and marched away in handcuffs.

Another eight Marines suspected of unspecified drug offenses also were taken out of formation. Some of them were detained by battalion personnel and taken to the Camp Pendleton brig, said Lt. Col. Eric Olson, the battalion commanding officer, during testimony at a court hearing on Nov. 15.

Marines in the formation that day testified at the hearing that their commanders called the accused Marines a “cancer” on the battalion.

The cases against the Marines fell apart after that hearing. The judge ruled the mass arrest — conducted in front of an 800-person battalion — was an unlawful violation of their rights, attorneys involved in two of the cases said.

Unlawful command influence, often called the “mortal enemy of military justice,” occurs when a commander uses his position of authority to influence court proceedings. Commanders have authority over courts-martial and therefore are expected to remain impartial during the process.

“After that ruling, I think the government saw the writing on the wall and wanted to get this out of the court system,” Whitman said in an interview Tuesday.

Whitman's client, a lance corporal originally charged with unspecified drug offenses, will be administratively processed out of the Marine Corps, Whitman said.

He added, it is up to the commanding officer to determine his client's discharge status, and he does not know what that will be.

Defense attorney Bethany Payton-O'Brien, a civilian who represents one of the Marines charged with human smuggling, said her client will be separated from the Marines but his charges were withdrawn and dismissed.

She said once the arrests were ruled unlawful, the government's case fell apart.

“Cases are promptly being disposed of in ways other than courts-martial,” she said.

The Marines did not specify which four Marines are still being charged criminally. Two of them — Lance Corporals Byron Darnell Law II and David Salazar-Quintero — were arrested by Border Patrol agents on July 3, when agents allegedly saw them pick up and transport unauthorized immigrants in Dulzura.

The other Marines were arrested separately from those taken at the battalion formation, so it's unclear if they will be affected by the unlawful command influence ruling.

Citing the recent case of Navy SEAL Edward Gallagher — who was acquitted of most charges but found guilty of posing with the corpse of an ISIS combatant — Whitman said the outcome of these cases shows that, given a chance, the military justice system works.

“The military justice system is under a lot of scrutiny,” Whitman said, “but it actually worked here — the judge got it right. It's actually a positive for the Marine Corps in that it shows the system can be fair.”