Commandant Gen. David Berger has prioritized redesigning the Marine infantry battalion as part of a 10-year plan to modernize the Corps 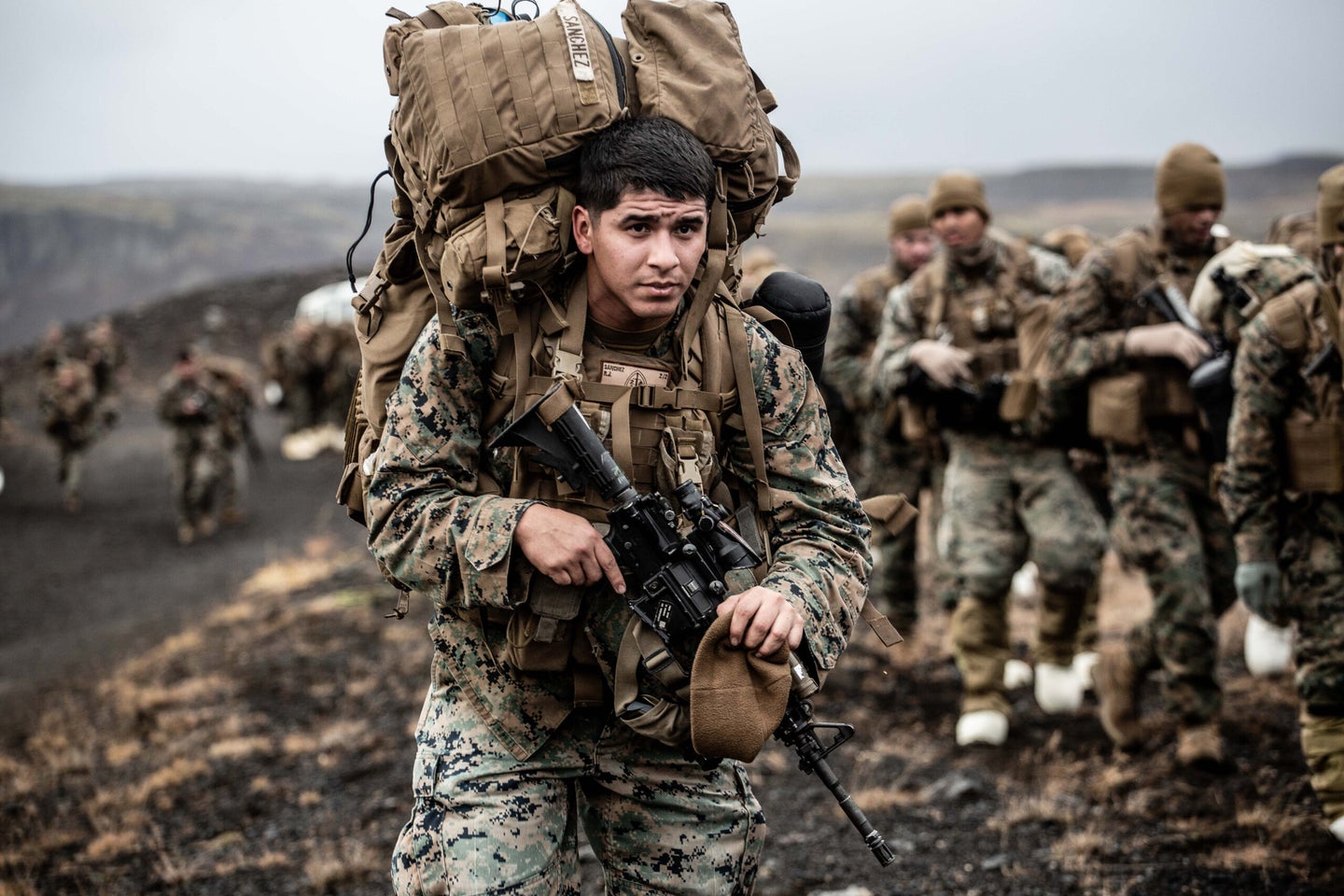 A U.S. Marine with the 24th Marine Expeditionary Unit (MEU) carries cold weather equipment as he begins to march across the Icelandic terrain October 19, 2018. The 24th MEU was in Iceland preparing for NATO Exercise Trident Juncture 2018. The main phase of Trident Juncture will start in Norway on October 25. The exercise will bring together around 50,000 personnel from all 29 Allies plus partners Finland and Sweden. Photo by Jack Sommerville.
SHARE

The Marine Corps will conduct wargames to determine whether infantry jobs should remain specialized or be rolled into a single military occupational specialty.

Commandant Gen. David Berger has prioritized redesigning the Marine infantry battalion as part of a 10-year plan to modernize the Corps. He told lawmakers this week that future enlisted infantry Marines “will be at a higher level than we’re producing right now.”

That will mean a longer training pipeline that will help prep grunts for making higher-level decisions, Berger said. But whether infantry Marines will continue training for unique MOSs remains to be seen.

“This is yet to be determined and will be informed throughout the force design implementation process and war gaming of our future force composition,” Capt. Sam Stephenson, a spokesman for Training and Education Command, said. The possible change was first reported by Marine Corps Times.

Infantry Marines, Berger said, are going to be operating in a more decentralized, distributed way in the future, and leaders will be relying on them to make more complex decisions.

“We need to take that Marine to a higher level so that the whole platoon can get to a higher level,” Berger said. “… So infantry training, both on the officer and enlisted side, [will be] more extensive, longer.”

The Schools of Infantry, which train enlisted grunts on both coasts, will begin running “running proof-of-concept courses” for entry-level Marines early next year, Stephenson said. At 14 weeks long, they will be more than 50% longer than the current nine-week course.

The length of the course will likely change as it’s developed and leaders receive feedback from the fleet, he added. The goal, he said, is to produce “the high-quality Infantry Marine that the future force needs to be successful.”

The course will initially focus on building individual skills, with later phases reinforcing those skills in a variety of environments that gradually increase in complexity. It will end with a capstone field exercise.

“The future Infantry Marine Course will incorporate additional tasks and skill sets previously untrained in entry level training with a focus on effective, effects-based decision making in all domains,” Stephenson said. “The course will produce a multi-disciplined Infantry Marine, able to survive, fight, and win in dispersed and contested environments.”

Several other communities have been affected by the Marine Corps’ force design efforts. The Marine Corps is shrinking in size and getting rid of some long-used equipment, such as tanks, to prepare for lighter missions in the Pacific.

Some tank Marines are getting the option to leave the service early as their units shut down. Law enforcement battalions are also preparing for deactivation.