A handful of U.S. Marine Corps infantrymen from Camp Lejeune, North Carolina, helped save novel coronavirus (COVID-19) patients in danger of dying while in transit to the USNS Comfort in New York City 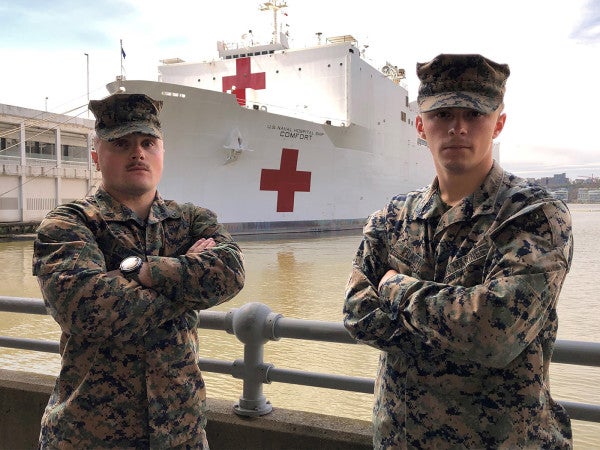 A handful of U.S. Marine Corps infantrymen from Camp Lejeune, North Carolina, helped save novel coronavirus (COVID-19) patients in danger of dying while in transit to the USNS Comfort in New York City.

Sgt. Austin Loppe and his Marines from Lima Company, 3rd Battalion, 2nd Marine Regiment, had just started a shift providing security for the Military Sealift Command hospital ship on April 7 when they received word that a local hospital was evacuating patients to the Comfort in 10 ambulances all at once, according to a recent Navy news release.

Loppe and his fellow Marines were manning a security checkpoint, responsible for screening each ambulance and managing traffic on Pier 90 to allow Navy medical staff to bring patients aboard and resume treatment.

The troops learned that the patient in the fourth ambulance in line was rapidly deteriorating because the vehicle’s oxygen tank was running dangerously low, according to the release.

The Marines halted the flow of traffic so the ambulance could safely maneuver ahead of the others as fast as possible and get the patient into the hands of Navy medical staff a half-mile down the pier, saving valuable time and the patient's life, the release states.

The infantry Marines had been trained in combat lifesaver and tactical combat casualty care, so they knew that the loss of oxygen for just a few minutes could cause permanent brain damage, Loppe said in the release.

“That wasn't something that myself or any of my Marines were willing to let happen to an American citizen,” he added. “So, we knew right away that we needed to get them linked up with the medical team as quickly as possible.”

That wasn't the only life or death decision Loppe's Marines faced that night. About 10 minutes later, another patient toward the back of the ambulance line also began running low on oxygen, according to the release.

As before, the Marines hustled to get the person in most desperate need of medical care to the head of the line as fast as they could.

Other patients in ambulances also began running low on oxygen. Navy medical staff provided extra oxygen tanks to the Marines, who then ran several hundred meters down the pier to the security checkpoint to distribute them to each of the ambulances, the release states.

“To be able to help New York and Americans in general is pretty awesome,” said Loppe, a native of Mingo Junction, Ohio.

Lance Cpl. Colton Flach, from Green Camp, Ohio, said he was impressed at how well the Marines, sailors and New York police worked together.

“They're with us 24-7 on post,” Flach said. “And the moment that we had got that call, I knew that I could count on them to be able to do whatever I needed them to do, and we would do whatever we could to help them as well, to get these patients the medical attention that they needed as fast as possible.”

The Marine infantry company providing security for Comfort had been training for an overseas deployment when it received orders to support the Comfort in New York, according to the release.

The Pentagon has deployed about 50,000 service members to assist with the nationwide response to COVID-19.

“We have an obligation to protect the American people, regardless of the enemy,” Gen. Mark Milley, chairman of the Joint Chiefs of Staff, said during a Pentagon briefing Tuesday. “In this case, COVID-19 is the enemy.”

Lima Company commander Capt. Peter Hofinga, a native of Rhinebeck, New York, said he was proud of how quickly his Marines adapted to a new challenge and helped his fellow New Yorkers.

“It's kind of hard to put in words; it's immensely humbling to observe the Marines and actions that small-unit leaders are making, rapid decisions on their own without any sort of tasking or supervision,” Hofinga said in the release. “Despite the fact that this is not really in their typical task group, or what they trained to do, they are able to operate within that friction and chaos to help both the Navy-Marine Corps team overall, as well as New York City residents.”