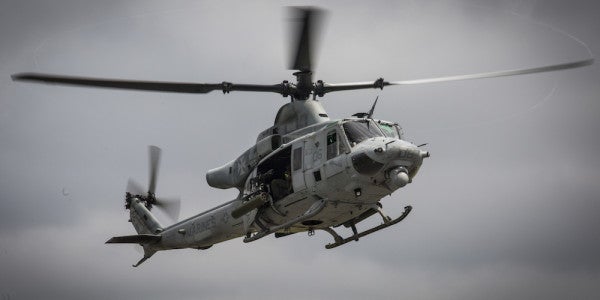 “The U.S. military is out of control. They can’t exercise any oversight, there are no signs they will reform, and the Japanese government can’t handle them,” Onaga told reporters in Naha on Wednesday after an AH-1 attack helicopter based at U.S. Marine Corps Air Station Futenma made an emergency landing at Tonaki village Tuesday evening.

Onaga made the remarks in the morning just before traveling to Tokyo. There were no injuries to the crew or to local residents in the incident, which comes just days before a local election on Feb. 4 where Futenma’s relocation will be a key issue.

“This is extremely regrettable. The Defense Ministry is calling on the U.S. military to conduct emergency inspections on all AH-1 attack helicopters stationed at Futenma and to suspend all flights of this aircraft,” Defense Minister Itsunori Onodera told reporters in Tokyo.

This month’s U.S. military mishaps could not have come at a worse time politically for Prime Minister Shinzo Abe and the ruling Liberal Democratic Party, and Komeito. On Jan. 28, Nago, on the northern part of Okinawa Island, kicks off its mayoral election. The main issue is expected to be the relocation of Futenma, which now sits in Ginowan in the central part of the main island, to Nago’s Henoko district, where a new offshore facility is being built.

Incumbent Mayor Susumu Inamine is seeking a third term and staunchly opposes the relocation. He has the backing of Onaga’s “All Okinawa” supporters, a loose coalition of local businesses and politicians opposed to the Henoko relocation and traditional anti-base activists. He is also backed by the Constitutional Democratic Party of Japan, the Japanese Communist Party and the Social Democratic Party.

Inamine’s challenger is Taketoyo Toguchi, a former Nago assemblyman who has the strong backing of some construction firms hoping to benefit from base construction and central government-funded public works projects and other base activities. He is supported by the Liberal Democratic Party and Komeito, which did not endorse a candidate in the 2014 Nago election. Toguchi also has Nippon Ishin no Kai’s support.

While Toguchi has offered a vague promise to seek the relocation of the base outside of Okinawa and Japan, he is the central government’s choice. If victorious, he is expected to allow the Henoko facility, which is decades behind schedule, to be completed.

Senior government officials, including Chief Cabinet Secretary Yoshihide Suga and LDP Secretary-General Toshihiro Nikai, are lobbying voters on his behalf and promising more local economic assistance. Toguchi himself has been campaigning on lifestyle issues while suggesting his connections to Tokyo would pay dividends for local voters, especially young mothers.

“I’ll cooperate with the central government to ensure a budget for lifestyle issues, and we’ll create the best child-raising environment for Nago,” Toguchi told supporters at a Monday night rally.

It remains unclear as to what extent the three mishaps this month will influence the Feb. 4 election. Inamine won the 2014 election by about 4,000 votes over an LDP-backed candidate.

A ruling party-backed incumbent candidate in Sunday’s mayoral election in Nanjo, Okinawa, where the LDP has traditionally done well, lost to an Onaga-backed challenger by just 65 votes out of nearly 23,000 cast.

“There’s been a lot of anger in Nago over various incidents this year and last year involving the U.S. military. But nobody thinks this will be an easy win for Inamine,” said Katsuhiko Higa, a representative of the mayor’s support group.