The Marine Corps wants to transform JLTVs into aircraft-killing trucks

The Marine Corps wants to know whether the defense industry can transform its heavy weapons-mounted Joint Light Tactical Vehicles into mobile air defense systems for tracking and killing enemy drones, helicopters and fighters 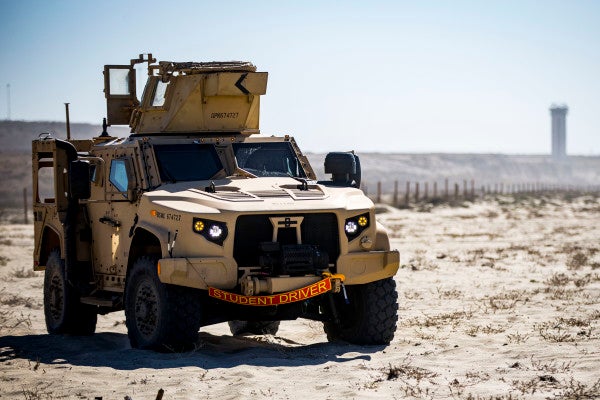 The Marine Corps wants to know whether the defense industry can transform its heavy weapons-mounted Joint Light Tactical Vehicles into mobile air defense systems for tracking and killing enemy drones, helicopters and fighters.

“This system will provide new and improved capability to mitigate the risk of attacks from Unmanned Aerial Systems and Fixed Wing/Rotary Wing aircraft while maintaining pace with maneuver forces,” according to the document.

The U.S. military has begun to beef up its air defense capabilities as it prepares for a possible future war against near-peer militaries with sophisticated aviation capabilities.

The Army is in the process of modernizing its air-defense units with the Maneuver Short-Range Air Defense (MSHORAD) system, which will feature Stryker combat vehicles armed with Hellfire missiles, a 30mm chain gun, a 7.62 machine gun and four Stinger missiles.

The Army is also working on equipping a platoon of four Stryker vehicles with 50-kilowatt lasers that are capable of engaging drones and combat aircraft, as well as rockets, artillery and mortars in fiscal 2022.

The Marine Corps' direct fire system will be part of the initial phase of the Marine Air Defense Integrated System, or MADIS, which will feature the command-and-control software integrated into Mk1 and Mk2 variants of the Corps' JLTV Heavy Guns Carrier, according to the document.

The MADIS Mk1 features turret-launched Stinger missiles, multi-functional electronic warfare capability and a direct-fire weapon such as a 30mm cannon on a remote weapons station. The MADIS Mk2 will be the counter-UAS variant, with a 360-degree radar and command-and-control communications equipment, in addition to a direct-fire remote weapons station and electronic warfare tech.

The Mk1 and Mk2 form a complementary pair and are the “basic building block” for modernizing the service's Low Altitude Air Defense Battalions, according to Marine Corps Systems Command's website.

The Marine Corps last year deployed its Light Marine Air Defense Integrated System, or LMADIS, using it to jam an Iranian drone that flew near a Navy warship in the Strait of Hormuz.