All 16 people aboard a KC-130 military refueling tanker were killed in a crash about 85 miles north of Jackson, Mississippi, on Monday afternoon,... 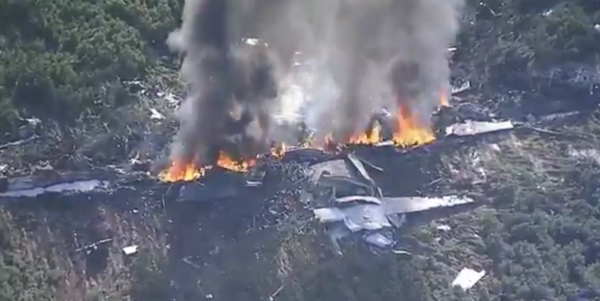 All 16 people aboard a KC-130 military refueling tanker were killed in a crash about 85 miles north of Jackson, Mississippi, on Monday afternoon, according to a WZTV report.

A Marine Corps spokesperson said that the aircraft “experienced a mishap,” but provided no details as of Monday evening. However, an official from Mississippi's Greenwood Airport said the aircraft was being tracked by air traffic controllers and was affected by structural failure at 20,000 feet, according to WNCN.

Firefighters were battling flames ignited by jet fuel. Helicopters were also said to be searching the crash site, where debris was scattered in a radius of 5 miles.

All 16 bodies were reportedly recovered from the crash site.

The KC-130 is powered by four engines and six-bladed propellers, has a primary dutyof refueling other aircraft and ground vehicles, and can hold up to 61,364 pounds of fuel.

Here's footage of the wreckage:

Have mercy. Here's footage of the USMC KC-130 crash tonight in Mississippi | via KXAN | At least 5 confirmed dead. pic.twitter.com/e0RwnJw4NI