When Navy Secretary Richard V. Spencer pitched sending an aircraft carrier into early retirement, he had an idea for how to answer the call for flattops around the world: an amphibious assault ship loaded up with F-35B Joint Strike Fighter jets 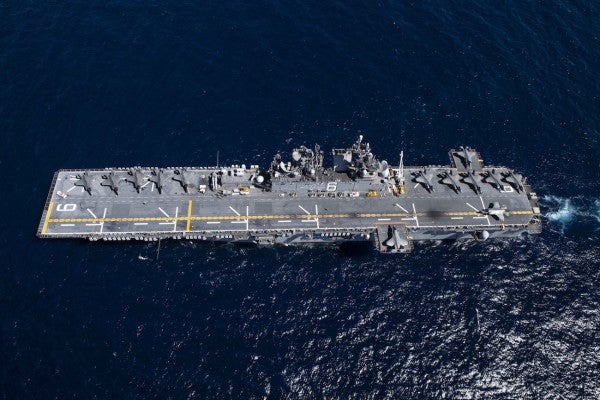 When Navy Secretary Richard V. Spencer pitched sending an aircraft carrier into early retirement, he had an idea for how to answer the call for flattops around the world: an amphibious assault ship loaded up with F-35B Joint Strike Fighter jets.

Spencer said he had big plans for what he could do with the $3.8 billion the Navy could save by retiring the aircraft carrier Harry S. Truman decades before planned. But the idea to forgo refueling the carrier's nuclear reactor core was unpopular on Capitol Hill and eventually reversed by President Donald Trump.

As the Navy grapples with aircraft carrier maintenance issues, Spencer said he's looking at new options. One possibility is loading up big-deck amphibious assault ships with F-35B Lightning aircraft and sending them out in place of carriers.

“My cost performance there is tremendous,” he said at a recent event in Washington, D.C. “Does it have the same punch? No, it doesn't. But it does have a very interesting sting to it.”

Marines are already testing the concept. Earlier this month, more than a dozen F-35B aircraft with Marine Fighter Attack Squadron 122 landed on the amphibious assault ship America in the Pacific.

That ship, which was built without a well deck, is designed to be a mini “Marine carrier” since it has more room for aircraft.

Spencer said he wants to see 20 F-35Bs, which are designed to operate from amphibious assault ships, on the America's flight deck.

“You might see us do that in the near future,” he said. “We might just launch it out once — try it out, put it in a couple of exercises and know that we have it up our sleeve.”

The Marine Corps called the test on the America “the birth of the most lethal, aviation-capable amphibious assault ship to date.” Lt. Col. John Dirk, VMFA-122's commanding officer, said in a news release about the exercise that adding the F-35Bs' sensors and weapons to the amphib fleet is a “lethal combination.”

The Navy has struggled to fill combatant commanders' requests for carriers. In March, the former head of U.S. Central Command said he couldn't always get a carrier to the Middle East when he wanted one.

Spencer said the money he could save by deploying “Lightning carriers” in place of refueling the Truman could've gone toward much-needed upgrades to Navy technology as the U.S. braces to take on a near-peer adversary. He said the service needs to spend that money on artificial intelligence, machine learning, 3D printing, quantum computing, unmanned ships and other high-tech updates.

“People came up to me and said, 'Are you out of your mind, secretary? Not refueling the Truman … that's just insane,'” Spencer said.

But if the sea services are going to be ready for the next fight, he said they must be allowed to ditch inefficient equipment. The Ford-class carriers will be able to fly 30% more sorties and operate with 25% fewer people on board than the Nimitz-class ships, he added.

“It's an efficiency game changer,” Spencer said. “So let me abandon an older vessel and move to the newer fleet.”