The Marine Corps is dropping nearly $48 million on Raytheon's Naval Strike Missile (NSM) as it moves toward a series of experiments involving striking enemy ships and maritime targets from land. 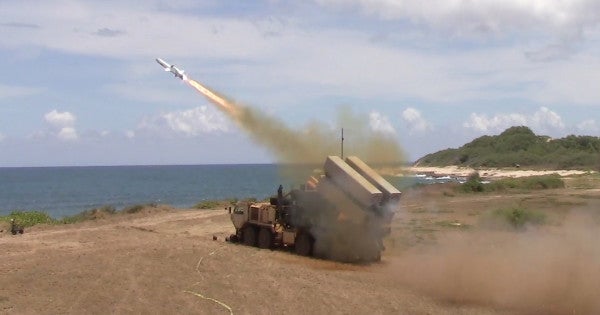 NATIONAL HARBOR, Maryland — The Marine Corps is dropping nearly $48 million on Raytheon's Naval Strike Missile (NSM) as it moves toward a series of experiments involving striking enemy ships and maritime targets from land.

Raytheon announced this week during the Navy League's Sea-Air-Space conference outside Washington, D.C., that it will provide the NSM to the Marine Corps under a $47.59 million Other Transaction Authority agreement, a Pentagon spending category for experimentation and prototyping.

The deal follows a 2018 Navy contract with Raytheon to manufacture and deliver the NSM as the over-the-horizon missile system for the service's littoral combat ships and the frigates that will succeed them.

“The Marine Corps' selection of the Navy's anti-ship missile enhances joint interoperability and reduces costs and logistical burdens,” Raytheon said in a statement.

Developed by Norway's Kongsberg Defence and Aerospace, the NSM features a 275-pound, high-explosive warhead and has an operational range of more than 100 nautical miles. In a high-profile experiment during the 2018 Rim of the Pacific Exercise, U.S. Army Pacific fired an NSM from a Palletized Load System truck to hit a decommissioned ship off the coast of Hawaii.

A spokesman for Marine Corps Systems Command, Manny Pacheco, said the service plans to integrate the missile onto land-based vehicles over the next few years.

“What the [Other Transaction Authority] is going to allow us to do is take that capability, put it on certain vehicle platforms to see what it can do,” Pacheco said. “[The Marine Corps wants] to do a variety of test demonstrations on the capability.”

Breaking Defense reported in January that the Marine Corps was moving forward fast with plans to develop a land-based, ship-sinking missile capability, as part of an effort called Navy-Marine Expeditionary Ship Interdiction System, or NMSIS. The outlet reported at the time that the Corps was considering NSM, Lockheed Martin Corp.'s Long-Range Anti-Ship Missile and Boeing's Harpoon for the development program.

It added that the service is considering three different vehicles as a missile launch platform, including the M142 High Mobility Artillery Rocket System; the Medium Tactical Vehicle Replacement, or 7-ton, truck; and the Logistic Vehicle System Replacement.

Pacheco indicated that a vehicle platform had not yet been selected, and specifics of timeline and experimentation moving forward would hinge, to some extent, on that decision.

Under Marine Corps Commandant Gen. Robert Neller, the Corps has become more aggressive in experimentation and pursuit of capabilities that can be integrated into existing platforms.

In 2017, Marine Maj. Gen. David Coffman, the Navy's director of Expeditionary Warfare, told Military.com that the Corps wanted a truck-mounted rocket system compact enough to fit in an MV-22 Osprey. The same year, the Marines fired HIMARS from the back of an amphibious ship, obliterating a land target 43 miles away.

In February, Neller told USNI News the Marine Corps wanted a long-range anti-ship missile as fast as possible to support the Navy from the land in sea-control efforts.

“There's a ground component to the maritime fight. We're a naval force in a naval campaign; you have to help the ships control sea space. And you can do that from the land,” he told the outlet.

Randy Kempton, Raytheon's NSM program director, told Military.com at Sea-Air-Space that the Marine Corps' selection of NSM is a big deal for the company.

“A year ago, we were at this show and we weren't quite sure where the Navy was going with NSM. We didn't have a big contract,” he said. “Fast-forward a year, and the Navy's got us under contract for a program of record, and in about a year's timeframe, we're already integrating into another service. So from our perspective, it's a big deal. It's gaining momentum.”

SEE ALSO: The Pentagon Wants A Buttload Of Guided Rockets To Slap Russia And China From Hundreds Of Miles Away

WATCH NEXT: Marines Fire HIMARS From The USS Anchorage