"It's a work in progress," said a Marine who picked up the phone late Thursday at the drill center of the 4th Air Naval Gunfire Liaison Company (ANGLICO) in West Palm Beach. "We are planning on Mar-a-Lago but nothing is set in stone." 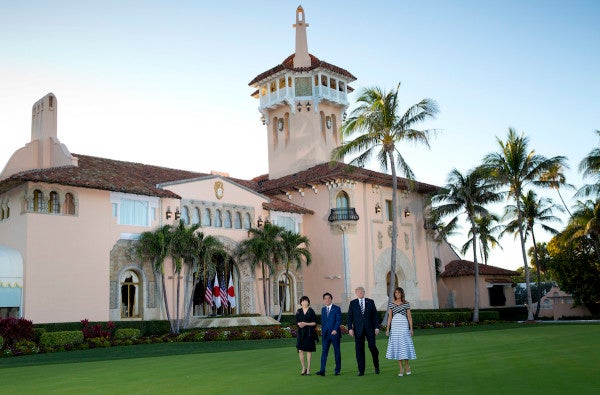 At a time when taxpayer and foreign-government spending at Trump Organization properties is fueling political battles, a U.S. Marine Corps reserve unit stationed in South Florida hopes to hold an annual ball at a venue that could profit the commander in chief.

The unit is planning a gala to celebrate the 244th anniversary of the Marines' founding at President Donald Trump's Mar-a-Lago club in Palm Beach on Nov. 16, according to a posting on the events website Evensi.

“It's a work in progress,” said a Marine who picked up the phone late Thursday at the drill center of the 4th Air Naval Gunfire Liaison Company (ANGLICO) in West Palm Beach. “We are planning on Mar-a-Lago but nothing is set in stone. We booked it but there were complications involved. … It's just money and some other things. We're doing our best.”

The Marine said a final decision would be made next week. A link from the event posting to buy tickets was not working late Thursday.

It wasn't immediately clear how much Mar-a-Lago would charge to host the Marine Corps Birthday Ball — or even if it might do so for free. As many as 700 guests have attended previous balls for the 4th ANGLICO, according to invitations posted online.

Marine Corps balls are held every year in honor of the Corps' Nov. 10 birthday, although not always on that day. Marine Corps units around the world schedule their own birthday balls, which are formal affairs for active duty Marines, veterans, spouses and special guests. The balls have two parts: an official ceremony, which can use government equipment and taxpayer dollars, and a social function paid for by private fundraising associations. The 2017 ball, for instance, was a celebration co-hosted by the nonprofit Marine Corps League of the Palm Beaches and 4th ANGLICO at the Hilton Palm Beach Airport hotel.

While specific funding sources for the upcoming ball are unclear, the practice of spending taxpayer money at Trump properties has been criticized by Democrats and government watchdogs. A recent Politico report on U.S. Air Force crews being lodged at Trump's resort in Scotland led Air Force leaders to order an internal review. Trump has also raised the possibility of bringing the Group of Seven gathering of world leaders to his financially struggling resort in Doral.

Details about the event were hard to come by late Thursday. Mar-a-Lago reception staff had departed their stations early in the afternoon, keeping to the club's less strenuous off-season schedule, a security staffer said. Alan Garten, an attorney for the Trump Organization, did not immediately return a request for comment. Neither did Marine Corps headquarters. The White House had no immediate comment.

Regardless of who is paying, hosting an event at the president's club could create the possible appearance of impropriety for the Marine Corps, which like other branches of the military tries to steer clear of politics.

Congressional Democrats have taken action to prohibit the military and other federal officials from spending taxpayer dollars at any property owned by the president, vice president or Cabinet officials. The HOTEL Act — Heightened Oversight of Travel, Eating and Lodging — was introduced by 34 Democratic senators this week amid reports that the Air Force spent $184,000 on overnight stays at Trump's Turnberry resort in Scotland during refueling stops, instead of transiting through a military base.

Trump's Mar-a-Lago, a historic mansion, is one of the crown jewels in the president's tourism empire. He has hosted foreign leaders there and often visits during the winter high season.

While the club caters to Palm Beach society, it may be in need of new business. The club's event calendar — previously dependent on major charities booking galas — took a hit after Trump did not condemn a violent white nationalist march in Charlottesville, Virginia, in 2017. Where the club once booked events that cost as much as $200,000, it now offered rates as little as $40,000. Mar-a-Lago revenue fell to $22.7 million in 2018, a drop of 10 percent from the year before.

That vacuum opened the door for a new wave of events, including a South Florida massage-parlor entrepreneur named Cindy Yang who sold Chinese businesspeople eager to meet the president the opportunity to attend lower-profile events at his club. Yang's activities gained the attention of the FBI and U.S. Attorney's Office in Miami, which are investigating possible Chinese espionage at the club and South Florida. Lax security at Mar-a-Lago also allowed a Chinese woman named Yujing Zhang to enter the club without permission. She was recently convicted of trespassing on restricted property and lying to a federal agent, and is also under scrutiny from the national security investigation.

ANGLICO units are small, specialized teams of Marines who can be inserted into combat situations to direct overhead warplanes or direct artillery to ground targets. ANGLICO units also train to be able to direct international forces aircraft or artillery in exercises or ongoing military operations.

For the Marine Corps ball hosted by the 4th ANGLICO, Mar-a-Lago could be a major boost compared to the time before Trump took office.

In 2015, the Palm Beach County Convention Center hosted the gala. In 2014, it was held at the Broken Sound Club in Boca Raton. A press release said the club had donated the use of its facilities.