A popular retail chain surrendered to the Marines on Tuesday, following a warning from the Corps to quit using its... 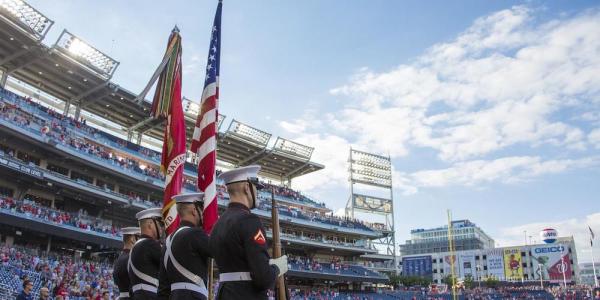 A popular retail chain surrendered to the Marines on Tuesday, following a warning from the Corps to quit using its name to sell Memorial Day merchandise.

Shortly after The San Diego Union-Tribune showed copies of the ads to Marine officials, Major League Baseball launched a probe into the campaign, too.

By early evening on the East Coast, Lids had removed all online references to the Corps.

Marine spokesman Maj. Brian T. Block told the Union-Tribune by email that the service “should not have been used in the promotional language on the website.”

“We do not have a license relationship with either the company selling that product, nor the MLB,” he added. “The USMC Trademark Office will contact the parties involved to relay our position that USMC trademarks may not be used in the promotion of an unlicensed product.”

None of these players served in the Marines although Hall of Famers such as Ted Williams, Rod Carew, Roberto Clemente, Eddie Collins and Ted Lyons did.

Jeff Pearson, ?senior vice president of e-commerce and marketing at Lids, called the Union-Tribune to say that the online ad campaign might have been launched in error and he was investigating.

As a reseller, the company often receives the right to vend trademarked merchandise from licensed companies, he added.

LIDS and its affiliates are subsidiaries of Genesco Inc., a publicly-traded apparel and licensed-merchandising firm headquartered in Nashville with nearly $3 billion in annual revenues.

Major League Baseball officials in New York told the Union-Tribune that they also were investigating the ad campaign but insisted teams had no prior knowledge of the Lids sales.

Club caps made by New Era for the weekend games don’t bear any military insignia and MLB’s online promotional materials don’t mention any of the armed forces by name.

Franchises plan to hold special pre-game ceremonies at stadiums nationwide throughout the weekend and also participate in a moment of silent remembrance on Memorial Day to honor troops lost at home and abroad.

The Toronto Blue Jays will wear four maple leafs on the right side of their caps to honor the four branches of Canada’s military, too.

Like the Coast Guard, Navy, Air Force and Army, the Marine Corps runs a trademark licensing office so that it can control how its logos, slogans and marks are used.

Related: Meet The Cape Cod Jeweler Who Owns The Navy’s New Ad Slogan — And Isn’t Giving It Up Without A Fight »

Headquartered in Virginia, the Marine Corps Trademark Office owns the eagle, globe and anchor device, “USMC” and other iconographic elements of the service. Even the digital camouflage pattern on Marine uniforms — called “MARPAT” — is trademarked.

Block asked Lids to look into that product and Pearson told the Union-Tribune that he would investigate it, too.