Marines are testing a non-lethal mortar round for crowd control

They may not be deadly, but some of the nonlethal weapons the Marine Corps is working on look pretty devastating 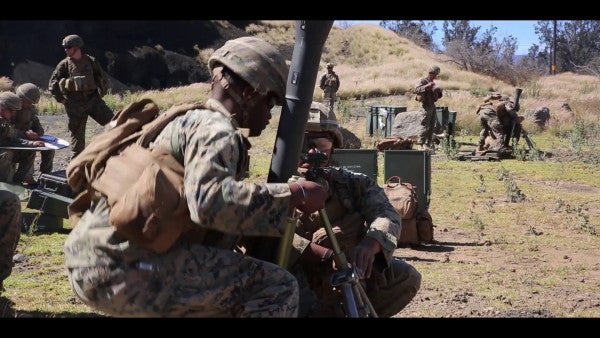 QUANTICO, Virginia — They may not be deadly, but some of the nonlethal weapons the Marine Corps is working on look pretty devastating.

The Marine Corps Joint Nonlethal Weapons Directorate is currently testing an 81mm mortar round that delivers a shower of flashbang grenades to disperse troublemakers. There is also an electric vehicle-stopper that delivers an electrical pulse to shut down a vehicle's powertrain, designed for use at access control points.

“When you hear nonlethal, you are thinking rubber bullets and batons and tear gas; it's way more than that,” Marine Col. Wendell Leimbach Jr., director of the Joint Nonlethal Weapons Directorate, told an audience at the Modern Day Marine 2019 expo.

Leimbach, a former tank officer, is trying to convince the combat units in the Corps, and the other services, that intermediate force capabilities are needed more than ever to deal with threats that show up in humanitarian assistance, disaster relief, nation-building — scenarios that are just below armed conflict and often referred to as “gray zone” operations.

“Let's be clear: I am a tank guy. … I love the lethality tanks bring, and they are absolutely necessary for high-intensity combat because there are some people you are just going to have to kill,” he said.]

But after U.S. military operations in Somalia, the Marine Corps was designated the Defense Department's executive agent for nonlethal weapons development in 1996.

“In Somalia, it was painfully obvious that the Marine Corps and the Army that was fighting there did not have all the appropriate tools to deal with that mission set,” Leimbach said.

Since then, potential adversaries such as Russia and China have learned that the U.S. military does not really have the alternatives it needs to lethal force when dealing with tense situations, he said.

“Russian frigates by American ships knowing that we don't have capabilities to push back,” he said. “So, they intentionally stay just below that threshold.

“And they are doing it on the world stage, and they are making videos of them making American vessels back down, and they are using that in their propaganda … and show the weak Americans unable to affect them.”

“How many tragic examples, do people here know of, where lives were lost in Iraq and Afghanistan because we were unable to deal with the local population?” he said. “They approached a perimeter of a unit that had just gone through high-intensity combat, and all they had was lethal effects.”

This is where the Radio Frequency Vehicle Stopper, which is currently in development, can be used — at roadblocks and checkpoints to disable vehicles. It is designed to use radio-frequency electromagnetic waves to interfere with the electronics of the target engine, Marine officials said.

The Corps is also continuing to work on a “Solid-State Active Denial Technology” to disrupt hostile crowds without causing “permanent physical harm.”

It relies on radio frequency millimeter waves at 95 GHz traveling at the speed of light to create a “brief intolerable heating sensation on the person's skin,” Marine officials said.

Active-denial systems have been scrutinized in the past by critics who questioned whether they can cause permanent harm. Having a person in the loop at all times and adding features such as automatic shutoff after a few seconds will limit exposure and make it safer to use, officials said.

And 81mm flashbang munitions, which are currently in the test phase, are designed to deliver 14 flashbangs on a target to warn or move individuals and suppress potential threats.

“Nonlethal in no way is equivalent to non-painful,” Leimbach said. “It may not be lethal, but it is still very effective.”