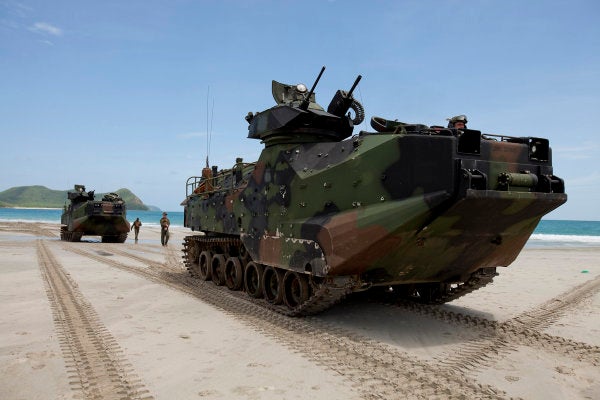 The Marine Corps' end strength will drop by thousands for the first time since it ended a years-long post-war drawdown as the service moves forward with a plan to slash manpower costs to pay for modern equipment and weapons systems.

The manpower reductions are “part of larger reform initiatives aimed at internally generating resources … to reinvest in modernization and increasing lethality,” budget documents state. Moving toward a smaller service is part of a plan to get the Marine Corps to where it needs to be in the next 15 years, the request states.

If approved, the reduction would mark the first time the force has faced personnel cuts since 2016, when the Marine Corps ended a drawdown that cut about 20,000 from the ranks after it bulked up during the height of the wars in Iraq and Afghanistan.

The enlisted force will absorb the brunt of the cut to personnel strength, falling from an authorized 164,688 Marines in 2020 to 162,430. Under the plan, the officer corps would increase by 158 people.

The new 184,100 end strength is scheduled to hold steady through 2025, budget documents state. The size of the Marine Corps Reserve — which stands at about 38,500 personnel — will not be affected by the end-strength decrease.

The Marine Corps will continue to focus on investing in special skills needed to meet requirements in an evolving operational environment, the budget request states, “such as those required for special operations, intelligence operations, electronic, information and cyber warfare.”

“This is the strategy that supports the sustainment of a more experienced, better trained and more capable force by re-scoping the active Marine Corps end strength and force structure to the capabilities necessary to be appropriately manned, trained and equipped as a naval expeditionary force-in-readiness and prepared to operate inside actively contested maritime space in support of fleet operations,” budget documents state.

The Marine Corps is currently undergoing a monthslong force-wide review that will determine the types of military occupational specialties it will need in the future. Commandant Gen. David Berger called force design his No. 1 priority in his planning guidance for the service.

Berger told Military.com last summer that he was considering cuts to the force to pay for upgrades to outdated training ranges and equipment. The service plans to spend $2.9 billion, about 6% of its total request, on new equipment.

The budget request also lists several programs the service will ditch because the equipment is “no longer supporting future modernization. That equipment includes phasing out the decades-old Amphibious Assault Vehicle along with the heavy and slow Mine-Resistant Ambush Protected vehicles.

The Marine Corps has been replacing AAVs with the new Amphibious Combat Vehicle and MRAPs with Joint Light Tactical Vehicles.

The Marine Corps plans to ramp up its ACV purchases in 2021, with plans to spend about $479 million on 72 vehicles — 16 more than last year.

Military.com reported in August that the Marine Corps was boosting the number of JLTVs it planned to buy to 15,000 as it moves to replace the rest of its light fleet of vehicles.

The Marine Corps is also continuing to invest in new fixed-wing, rotary and tiltrotor aircraft after years of flying its planes, helicopters and MV-22B Ospreys in Iraq and Afghanistan led to serious readiness problems.

The Marine Corps wants to buy 10 F-35C Joint Strike Fighter jets that can operate on aircraft carriers and 10 of the B-variant, which can take off from and land vertically on amphibious assault ships. Last year, it bought 10 F-35Cs and 16 F-35Bs.

The service is increasing its KC-130J Hercules purchases in 2021 to five, up from three last year. It wants three more MV-22B Osprey tiltrotor aircraft, which have been essential for the land-based crisis response units responding to crises across long distance.

The Marine Corps also wants seven new CH-53K heavy-lift helicopters in 2021, which is one more than last year. The service is planning to build up its heavy-lift helo total to 71 CH-53Ks by 2025.

The service has no plans to purchase new unmanned aircraft in 2021. It will invest in developing the Ground Based Anti-Ship Missile that can be used by an artillery battalion on land. The Navy and Marine Corps are both investing in longer range and hypersonic weapons.