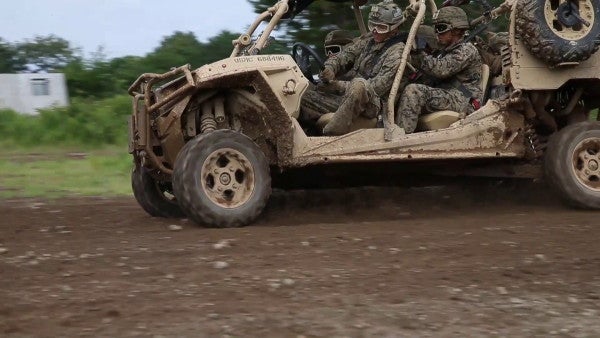 The New York Times reported last week on the 10 recalls Polaris Industries had issued for fire hazards on its RZR vehicles between 2013 and 2018. There are dozens of social media posts showing the vehicles burning, the paper reported, and the accidents have led to a host of lawsuits, including wrongful death and personal injury claims.

Kinney said MARSOC takes the safety and security of Raiders seriously at all times.

The command is still using its MRZRs for training and overseas missions, she said, along with some commercial Polaris vehicles MARSOC has in its inventory. They haven't had problems with any of the vehicles, she added.

Officials with Polaris Government and Defense, which designs the MRZR version of the vehicle Marines use, did not immediately respond to questions about whether that model has experienced any fire safety issues.

Company officials told The New York Times that the safety of its riders has “always been our top priority” and that allegations and claims against Polaris are “misleading, lack full context and, at times, are simply inaccurate.”

The gas- and diesel-powered vehicles come in four models that can carry between 1,000 and 1,500 pounds. The unarmored vehicles can fit either four or six people, depending on the model, and can fit into an MV-22B Osprey aircraft.

MARSOC had its first MRZR death earlier this year when Staff Sgt. Joshua Braica was killed in a rollover accident. Two others were injured in the crash, which remains under investigation.

There were no reports of fire being involved in that mishap.

“The operator's manual has fire safety warnings for exhaust systems and refueling operations, and each vehicle is equipped with a fire extinguisher,” she added.

Marines recently used a weapon system that includes an MRZR to take out an Iranian drone from aboard the amphibious assault ship Boxer, as first reported by Military.com. Marines attach an anti-drone system called LMADIS — or the Light Marine Air Defense Integrated System — to tactical vehicles, including the MRZR, to scan the skies for enemy aircraft.

The system has been used on ships' flight decks and on land.