Inside Project Metropolis, the Marine Corps’ plan to wage war in the cities of tomorrow 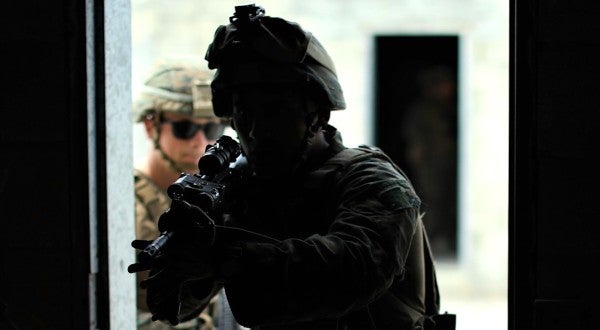 Hundreds of Marines will join their British counterparts at a massive urban training center this summer that will test the leathernecks' ability to fight a tech-savvy enemy in a crowded city filled with innocent civilians.

They'll spend weeks weaving through underground tunnels and simulating fires in a mock packed downtown city center. They'll also face off against their peers, who will be equipped with off-the-shelf drones and other gadgets the enemy is now easily able to bring to the fight.

It's the start of a four-year effort, known as Project Metropolis, that leaders say will transform the way Marines train for urban battles. The effort is being led by the Marine Corps Warfighting Laboratory, based in Quantico, Virginia. It comes after service leaders identified a troubling problem following nearly two decades of war in the Middle East: adversaries have been studying their tactics and weaknesses, and now they know how to exploit them.

With tensions heating up with Iran, China and Russia, it's likely Marines could face a far more sophisticated enemy than the insurgent groups they fought in Iraq and Afghanistan.

Just this week, Iran shot down a massive U.S. Navy drone capable of flying at high altitudes that collects loads of surveillance data. President Donald Trump said he called off retaliatory strikes just minutes before the operations were slated to kick off.

Less than two weeks prior, a Russian destroyer nearly collided with a U.S. Navy warship in the Philippine Sea. These are just some of the examples of close calls that could have left Marines and other U.S. troops facing off against near-peer militaries equipped with high-tech equipment in highly populated areas.

“The enemy has changed,” Leslie said. “… They obviously have more access to drones. I think the enemy's sensing capabilities have increased, they have the ability to see in the night just as well as we can, and they have capabilities that can exploit our technology or disrupt our technology.”

The Marine Corps isn't alone in grappling with these new challenges. The Army is spending half a billion dollars to train soldiers to fight underground, and has begun sending small-units to its massive training center in California where leaders are challenged with more complex warfighting scenarios.

The Army also found that young sergeants in most infantry and close combat units don't know how to maneuver their squads or do basic land navigation, Military.com reported this spring.

Those are skills Marines must continue to hone, Leslie said, since so many advantages they're used to having on the battlefield are leveling off. It's not just room-clearing Marines need to be good at, he said, but overall urban operations — things like figuring out ways to penetrate a building without destroying it since it's right next to a school or hospital.

The training center Marines and British Royal Marines will use this summer is a sprawling 1,000-acre site that houses dozens of buildings, some with up to seven stories and basements. The complex also has more than a mile's worth of underground tunnels and active farmland.

The urban center has been used not just to train troops, but to help government leaders prepare for pandemic responses or natural disasters as well.

Kilo Company will complete four phases during the month they spend there, Brig. Gen. Christian Wortman, who recently served as the Warfighting Lab's commanding general, told reporters last month. It will culminate with a five-day force-on-force simulated battle in which the Kilo Company Marines, equipped with new high-tech gear, face off against a like-minded enemy force with its own sophisticated equipment.

The concept was introduced by Commandant Gen. Robert Neller last summer to help Marines better prepare to fight a near-peer enemy. The British Royal Marines participating in the exercise will either join Kilo Company's efforts against the aggressor, or act as another force operating in the same region, Leslie said.

Project Metropolis will build on years of experimentation the Marine Corps has conducted as part of its Sea Dragon 2025 concept. Leslie said the grunts picking up the next leg of experimentation in Indiana will be further challenged to use some of the new technology Marines have been testing in a more complex urban setting, similar to what they're likely to face in a future warzone.

“That's going to be a major thing,” he said. “We're looking to see, what's the table of organization look like to work with that, and is it any different if it's an urban vehicle?”

Rifle squads will continue experimenting with unmanned aerial systems, Leslie added, to spot enemy positions without sending someone into a danger zone. They'll use ground robots that have the ability to map the insides of buildings, and will test Marines' decision-making when they're overwhelmed with information.

“Really want we want to see is how the tech integrates and also how it operates in a dense urban environment,” he said.

Kilo Company will also work with nonlethal systems, Wortman said, which they can turn to if they're in an area where there could be civilian casualties. They'll have access to kamikaze drones and “more sophisticated tools for delivering lethal fires,” he added.

It's vital that they see that Marines are able to put these new tools to use quickly and easily, Wortman said, as they don't want them to be fumbling with new systems in the middle of combat situations.

Building on the past

Leathernecks saw some of the bloodiest urban battles since Vietnam's Battle of Hue City in Fallujah, Iraq. About 12,000 U.S. troops fought in the second leg of the 2004 battle to turn that city back over to the Iraqi government. In the fierce battle, which involved going house-to-house in search of insurgents, 82 U.S. troops were killed and about another 600 hurt.

The Marines learned during those battles, Leslie said. But a lot has changed in the last 15 years, he added. With adversaries having access to cheap surveillance drones, night vision and other technology, military leaders making life-and-death decisions on the battlefield must adjust.

The goal, Wortman said, is to keep Marines armed with and proficient in to keep their edge on the battlefield.

Every city has a different character, too, Leslie added, so what Marines saw in Fallujah is not going to be the same as what they can expect in a new fight.

There has also been a great deal of turnover in the Marine Corps since combat operations slowed in Iraq and Afghanistan, Leslie said. Today's generation of Marines is also incredibly tech-savvy, Wortman said, and they're likely to find ways to use some of the new gear they're handing to them during this experiment and come up with innovative new ways to employ it.

“We have the expectation that these sailors and Marines are going to teach us about the possibilities with this technology because they'll apply it in creative … ways the tech developers didn't fully anticipate.”