The Marine Corps Finally Bids Farewell To Its Last Prowlers

Editor’s Note: This article by Gina Harkins originally appeared on Military.com, a leading source of news for the military and veteran community. The last... 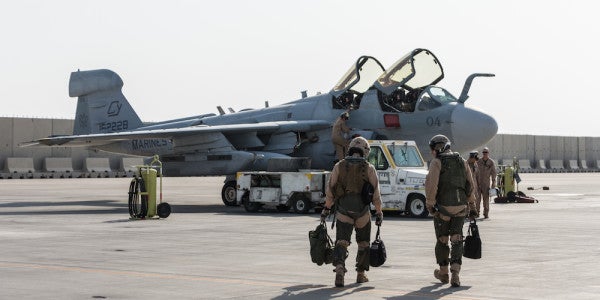 The last of the Marine Corps' remaining EA-6B Prowler aircraft have wrapped up their final mission in the Middle East, where they supported troops taking on ISIS. Now, the electronic-warfare aircraft will soon be headed to the boneyard.

More than 250 members of Marine Tactical Electronic Warfare Squadron 2 are returning to North Carolina after spending seven months operating out of Al Udeid Air Base in Qatar. The squadron — the last to fly the service's decades-old electronic-warfare aircraft — is only about four months away from being deactivated.

But that didn't slow the Death Jesters downrange, where they were tapped with supporting two campaigns simultaneously: Operation Inherent Resolve in Iraq and Syria, and Operation Freedom's Sentinel in Afghanistan.

“The mission of the Prowler is and always has been to deny, degrade and disrupt the enemy's use of the electromagnetic spectrum,” said Capt. Robert Ryland, an electronic-countermeasures officer with VMAQ-2. Being based in Qatar, he added, allowed them to respond to missions for both operations.

The Marines were called on to support not only U.S. ground troops, but coalition forces as well. From planning missions to executing them, the squadron worked with troops from several countries.

“There were a lot of people on this deployment who've dedicated their entire lives to this aircraft, its community and most importantly, the electronic-warfare mission,” Ryland said.

The end of an era

The Prowler has been a part of the Marine Corps' aviation arsenal since the Vietnam era. The aircraft has been vital on the battlefield, since, including during the wars in Iraq and Afghanistan and now in the fight against ISIS terrorists.

Seeing the Prowler used all the way up until its sundown says a lot about its capabilities, said 1st Lt. Sam Stephenson, a spokesman for 2nd Marine Aircraft Wing. Despite the aircraft's age, Ryland said the Marines with VMAQ-2 were able to maintain high readiness throughout this final deployment.

“There's sometimes a bit of a misconception that old equals having a hard time getting jets airborne, but that's actually not the case with the Prowler,” he said.

Ryland credits their skilled maintainers, who've worked on Prowlers for a long time. Some joined VMAQ-2 when other Prowler squadrons deactivated.

Now as VMAQ-2 prepares to deactivate, too, the Marines with this squadron are on the lookout for new opportunities. Some will transition to other Marine Corps aircraft, join a different branch, or leave the military when their service time is up, Ryland said.

“Everybody has their own personal plan for what they'll do next,” Ryland said.

If Marines weren't selected to transfer to work on another aircraft, he said they could always serve in B-billets or support their headquarters. And some with EA-6B aircrews were also transitioning to work with drone squadrons, he said.

According to Marine Corps planning documents, that includes pods or sensors that can be affixed to other aircraft and new signals intelligence and cyber capabilities.

“This will be the new way the Marine Corps plans to transition from utilizing the Prowlers to a more distributed strategy where every platform contributes and functions as a sensor, shooter and sharer and an EW node,” Stephenson said.

Marine units heading to sea or combat are already carrying some of those capabilities, Sand said. They offer commanders a great deal of flexibility, since they can be added to fixed- and rotary-wing aircraft.

“A MAGTF commander can just walk out onto a flightline now, see the asset, and he or she owns that asset and can task that asset,” Sand said.

And Marine ground troops will still be able to call on joint forces when they need airborne electronic attack capabilities, he added.

“The Prowler in practical terms has been replaced in additional capacities by the Navy [EA-18G] Growler,” Sand said. “That's a Super Hornet … with a pretty fierce EW capability. The Growler really is the follow-on to the Prowler.”

For now, VMAQ-2 still has a few months of work left before the Prowlers' final flights. When the squadron does get ready to say goodbye to its beloved aircraft in March, Ryland says they'll hold a sundown ceremony at Marine Corps Air Station Cherry Point, North Carolina. Any Marine who worked with the Prowler, whether a year or decades ago, is invited to attend.

“The Prowler has been a really incredible workhorse for the Marine Corps, the United States and allied forces for many, many decades,” Ryland said. “I know the people who fly and fix these aircraft have a lot of respect for them and certainly for those who came before us.

“There is a tremendous amount of hard work and training that goes into performing the Prowler mission,” he added. “It's a great honor, every time I get to fly in one.”