Marine Pfc. Austin Farrell made headlines when he earned the title of deadliest shot at Marine Corps Recruit Depot, Parris Island, but the 21-year-old who grew up shooting in Culpepper, Virginia was actually hoping to shoot better than his record-breaking rifle qualification score 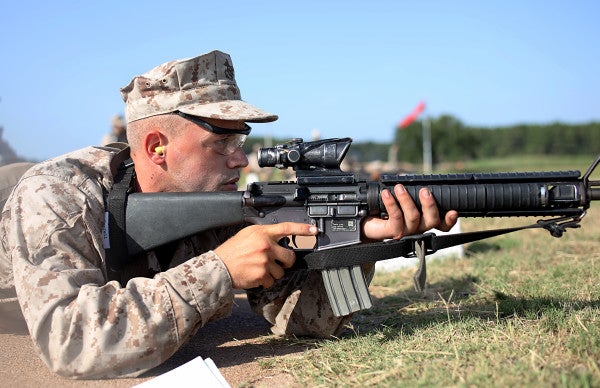 Marine Pfc. Austin Ferrell made headlines when he earned the title of deadliest shot at Marine Corps Recruit Depot, Parris Island, but the 21-year-old who grew up shooting in Culpepper, Virginia was actually hoping to shoot better than his record-breaking rifle qualification score.

Shooting an M16A4 rifle equipped with a 4X, fixed-power rifle combat optic, Ferrell broke the depot record for Table One rifle qualification in July with a total score of 248 out of 250.

The previous record on Table One — which includes shooting from the prone, kneeling and standing positions at target ranges of 200, 300 and 500 yards — was 247 out of 250.

Ferrell, who speaks in a humble tone, said he was excited about setting the new record, but not as much as some of his fellow Marines.

“I am excited, but to be honest with you … I grew up shooting long-range, so a rifle that I built at home — at 500 yards, I could put all the shots in a coffee mug,” Ferrell told Military.com. “So me personally, I am not all that impressed with it.”

Before joining the Marines, Ferrell spent much of his time shooting and has built nine AR-15 rifles.

“I have been shooting since I was a little kid; I really got into when I was 14 and I really started taking off with it,” Ferrell said, who describes himself as a pretty serious firearms collector.

“I have shot a little bit of everything but the past couple of years mainly long-range calibers like 6.5mm Creedmoor, .300 Win Mag, 5.56mm,” he said.

All that practice served Ferrell well, allowing him to shoot his record-breaking score on pre-qualification day. Marine drill instructors submitted that score, so he did not have to shoot on qualification day, Ferrell said.

Ferrell did say that he learned several new techniques from the primary marksmanship instructors, especially during the different firing positions.

“I had a pretty good foundation before I came here … but the techniques that the Marine Corps teaches are excellent for kids that have never shot,” Ferrell said.

“A lot of kids in my platoon literally went from never shooting a rifle in their life to shooting expert in Marine Corps qualification,” he said. “And that is with one week of class time essentially, then you have two days of practice and then pre-qual.”

Ferrell said the average score in his platoon was 235 out of the 250 max.

“My entire platoon shot expert on Table One and about half of them had never even shot a rifle before,” he said.

One of the best pieces of advice for shooters who struggle to perform better is to stay relaxed, Ferrell said

“The biggest thing, something that goes along with what all the primary marksmanship instructors teach here at Parris Island, is just stay calm,” he said.

“I noticed like when transitioning from the different yard lines for shooting like from 200 to 300, a couple of them would jog or run to get back there quicker. … You want to stay relaxed and they run back there, and their heart rate is up when they are trying to shoot.

“The biggest thing is just to stay relaxed.”

And while controlled breathing is an “extremely important” fundamental, it's not as crucial as proper trigger squeeze, Ferrell said.

“You can only control your breathing so much unless you have years of practice, so there are ways around having perfect breathing control, but I would say the biggest thing with shooting is trigger control,” Ferrell said.

With unsteady breathing “you might shoot a little high,” but pulling the trigger slightly to the right instead of straight back can cause the muzzle to move 1/16th of an inch — enough to take the shot off-target at 500 yards, Ferrell said.

Ferrell is now about two weeks away from graduating from boot camp, something a high-school football injury almost prevented him from doing.

In 2017, Ferrell was playing football for Riverbend High School as an offensive guard when he went down on the field and another player fell on top of his thumb and “shattered the whole joint and tore the ligament,” he said.

The injury initially disqualified him from the Marine Corps, but he eventually had it repaired in surgery and signed up for a five-year enlistment, he said.

For now, shooting will not be Ferrell's primary job since he is on track to become an intelligence specialist.

“I actually always wanted to be a sniper growing up, but a lot of retired military members that I talked to said, 'there is not much of a job market outside the military for a sniper,'” said Ferrell, who scored “very well” on the Armed Services Vocational Aptitude Battery test and qualified for the intel job.

After learning his skill, Ferrell said he plans to try out for Marine Forces Special Operations Command.

“Hopefully, I can still shoot pretty good, and maybe they will send me to Scout Sniper School,” he said.