This Marine Corps sniper nailed a target nearly 8,000 feet away. Here’s how he took one of the toughest shots of his life

Staff Sgt. Hunter Bernius, a veteran Marine Corps scout sniper who runs an advanced urban sniper training course, walks through his most technically difficult shot — he fired a bullet into a target roughly 2.3 kilometers (1.4 miles) away with a .50 caliber sniper rifle 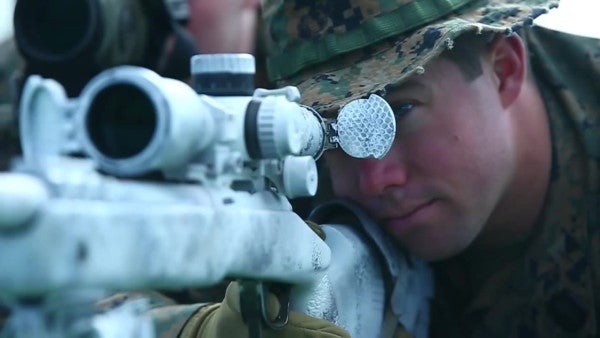 Staff Sgt. Hunter Bernius, a veteran Marine Corps scout sniper who runs an advanced urban sniper training course, walked INSIDER through his most technically difficult shot — he fired a bullet into a target roughly 2.3 kilometers (1.4 miles) away with a .50 caliber sniper rifle.

The longest confirmed kill shot of all time was taken by a Canadian special forces sniper, who shot an ISIS militant dead at 3,540 meters, or 2.2 miles, in Iraq in 2017. The previous record was held by British sniper Craig Harrison, who shot and killed a Taliban insurgent from 2,475 meters away.

“There are definitely people out there who have done amazing things,” U.S. Army First Sgt. Kevin Sipes, a veteran sniper and instructor at the sniper school at Fort Benning, Georgia, told INSIDER. “Anything is possible.”

Snipers are trained to scout the movements of enemy forces often from very exposed positions, and are also used to target enemy leaders and to pin down their forces. These dangerous missions require they become masters of concealment.

While 2,300 meters may not be a record, it is still a very hard shot to make.

U.S. military snipers typically operate at ranges between 600 and 1,200 meters. At extreme ranges, the Marine is pushing his weapon past its limits. The M107 semi-automatic long range sniper rifles used by the Marine Corps can fire accurately out to only about 2,000 meters.

“Shooting on the ground can be easy, especially when you are shooting 600 meters in or 1,000 meters in. That's almost second nature,” Bernius explained. “But, when you are extending it to the extremes, beyond the capability of the weapon system, you have all kinds of different things to consider.”

At those longer ranges, a sniper has to rely a lot more on “hard math” than just shooter instinct.

Bernius, a Texas native who has deployed to Iraq and other locations across the Middle East, made his most technically difficult shot as a student in the advanced sniper course, a training program for Marine Corps sharpshooters who have already successfully completed basic sniper training.

“When I came through as a student at the course I am running now, my partner and I were shooting at a target at approximately 2,300 meters,” Bernius explained. “We did in fact hit it, but it took approximately 20-25 minutes of planning, thinking of everything we needed to do with calculations, with the readings.”

At that distance, it takes the bullet roughly six to eight seconds to reach the target, which means there is a whole lot of time for any number of external factors to affect where it lands.

“You have all kinds of considerations,” Bernius told INSIDER, explaining that snipers have to think about “the rotation of the earth, which direction you are facing, wind at not just your muzzle but at 2,300 meters, at 1,000 meters, you name it.”

Direction and rotation of the earth are considerations that most people might not realize come into play.

Which direction the sniper is facing can affect the way the sun hits the scope, possibly distorting the image inside the scope and throwing off the shot. It also determines how the rotation of the planet affects the bullet, which may hit higher or lower depending on the sniper's position.

“This is only for extreme long range, shots over 2,000 meters,” Bernius explained.

Other possible considerations include the temperature, the humidity, the time of day, whether or not the sniper is shooting over a body of water (it can create a mirage), the shape of the bullet, and spin drift of the round.

“We ended up hitting it,” Bernius said. “That, to me, was probably the most technically difficult shot.”