3 Silent Drill Platoon Marines booted from the Corps for hazing 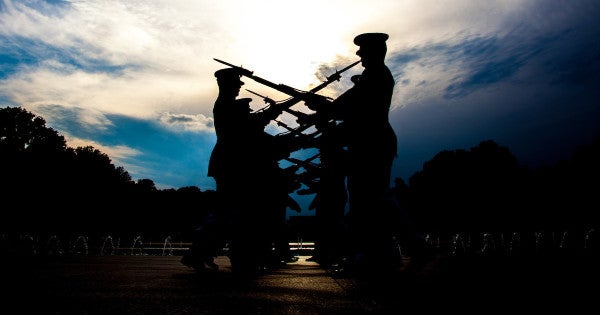 Several members of the Marine Corps' famous Silent Drill Platoon were kicked out of the service or punished by their command after someone reported witnessing them using a training rifle to strike someone.

Three Marines have been discharged in the last 60 days and two others lost a rank after the Naval Criminal Investigative Service began looking into hazing allegations inside the revered unit that performs at public events around the world.

The Marines who were separated accepted plea agreements, according to Gunnery Sgt. John Jackson, a spokesman for Marine Barracks Washington. The three, who had been charged with conspiracy and failure to obey an order, agreed to accept nonjudicial punishment and waive their rights to administrative separation boards, he said.

“The hazing that occurred within the Silent Drill Platoon was intolerable, and those Marines were held accountable for their actions,” Jackson added.

Two other Marines were busted down in rank, put on 45 days of restriction, and had to forfeit a half-month's pay after they were charged with failure to obey orders and violating the general article of the Uniform Code of Military Justice.

The Marine Corps did not identify those involved. Copies of the charge sheets have not yet been made available, and NCIS did not respond to a request to view the investigation.

The punishments were reported by Marine Corps Times over the weekend. The investigation was launched last fall when a Marine came forward to report the alleged crimes following a platoon-level hazing class.

“The hazing allegations in this case consisted of striking an individual with an open hand and closed fist, as well as with the buttstock of a nonfunctioning training rifle,” Jackson said.

Col. Donald Tomich, commanding officer of Marine Barracks Washington, where the platoon is based, immediately assigned an investigating officer to look into the claims. The next day, the case was turned over to NCIS.

“The commanding officer has proven he doesn't take hazing allegations lightly, and he's created an environment where Marines can feel comfortable reporting prohibited activities,” Jackson said. “Marines realize how serious the command treats these claims, and we believe they are confident in the command's ability to ensure a thorough investigation is conducted following any allegations.”

Military.com reported in November that five Marines had been placed in pretrial confinement after the investigation began. Jackson said they were sent to Rappahannock Regional Jail in Stafford, Virginia, “to protect other Marines from hazing or retaliation.”

Two were released within a week, two after about four weeks, and one after six weeks.

More oversight, no unit is 'elite'

Tomich and his top enlisted adviser, Sgt. Maj. Matthew Hackett, now hold regular formations where they try to dispel thinking that any unit at Marine Barracks Washington — including the Silent Drill Platoon, which performs at high-profile events — is considered “elite,” Jackson said.

The Silent Drill School, where members of the platoon train, has also seen adjustments. There's now battalion-level oversight not only within the unit, but the schoolhouse too.

“There have been adjustments made to the training pipeline to ensure any elitist mindset is eliminated,” Jackson said.

That includes daily stops at the schoolhouse from either the platoon commander, platoon sergeant or battalion drill master. The goal, Jackson said, is engaged leadership and supervision.

All Marines receive annual training on preventing and responding to misconduct at the battalion and small-unit levels, Jackson said, and that will continue.

Command leaders also looked for ways to “better cultivate a climate and culture of dignity, respect and trust within our units,” he added.

The Silent Drill Platoon has a new commander and platoon sergeant, but the changes are not a result of the investigation, Jackson said. The Marines in those positions had been scheduled to rotate months before the allegations surfaced.

Despite the high-profile investigation, Jackson stressed that most of those assigned to Marine Barracks Washington meet their missions with dedication and integrity.

“The Marines and sailors here at Marine Barracks Washington support upward of 1,500 events every year, and do so with the highest of standards,” he said.This article originally appeared on Military.com