The Marines are known for recruiting some of the most physically fit young people — and now they might be after the brainiest too. 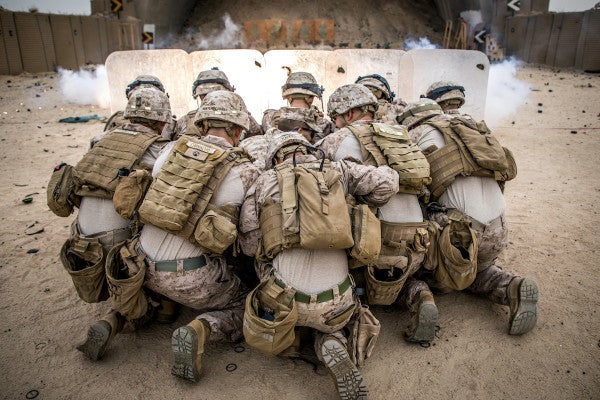 The Marines are known for recruiting some of the most physically fit young people — and now they might be after the brainiest too.

Commandant Gen. David Berger has instructed his staff to look at raising the bar on a test score used to weed out new recruits. In the next six months, the Marine Corps could require all incoming recruits to score at least a 40 on the Armed Forces Qualification Test — a nine-point jump over what's needed to enlist today, according to a copy of the memo, obtained by Military.com.

Berger also wants infantry riflemen to hit a General Technical score of at least 100 in the next six months. That's up 10 points from the score riflemen are required to have now.

Both test scores are based on how people perform on specific sections of the Armed Services Vocational Aptitude Battery test, known as the ASVAB. That test, according to the Defense Department, is meant to measure a person's strengths and potential for success in military training.

The Marine Corps and Army require potential troops to have at least a 31 on their AFQT to join, according to recruiting command officials. The Navy raised its requirement to 35 in 2003; the Air Force dropped its minimum score from 40 to 36 in 2004 after defense officials “renormed” the test, officials said at the time.

The new scores are two of several innovative and attention-grabbing initiatives under consideration, according to a four-page memo Berger issued to his assistant and deputy commandants Feb. 20. Berger also directed his staff to remove all Confederate materials from Marine Corps bases, look at a year-long maternity leave policy for female Marines who have had babies, and find ways to get more women into ground-combat positions.

Berger said the Marine Corps should move out with the plans, barring any evidence-based analysis that the changes will cause irreparable damage to recruiting efforts or readiness.

Demanding superior performance and enforcing high standards should not be viewed as draconian, said Maj. Eric Flanagan, the commandant's spokesman. It should be expected by professionals, he added.

“The end state is a better trained and educated Marine who can lead on an increasingly complex battlefield,” Flanagan said.

The infantry rifleman military occupational specialty is the largest in the Marine Corps. Raising their minimum GT scores to 100 will ensure high-caliber Marines are placed in the job, he said.

The 0311 MOS is one of eight in the infantry community. Four of them currently require a GT score of at least 90: rifleman, light-armored reconnaissance Marine, machine gunner and mortarman.

Scout snipers and anti-tank missile gunners currently need a score of 100 or above. Reconnaissance Marines and critical skills operators need a minimum of 105.

Flanagan said there are no plans to bump any of the other MOS requirements up at this time.

Berger isn't the only military leader pushing for more education in the ranks. The Navy Department now has a new chief learning officer, who's working to stand up a community college that could allow more Marines and sailors to earn degrees during their enlistments.

Weapons and communications systems are only getting more complex, John Kroger, the chief learning officer, told Military.com last fall. The U.S. is facing new threats from near-peer adversaries, including Russia, China and Iran.

“We're going to need to tap the full potential of our enlisted force,” Kroger said.