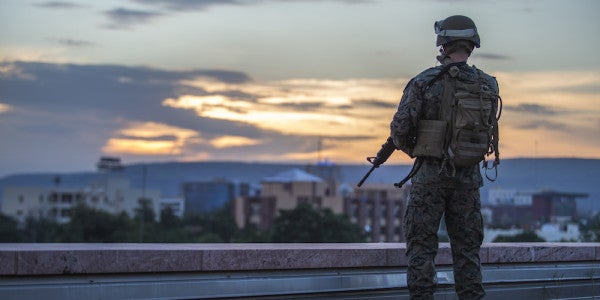 In a push to streamline the selection process for the Marine Corps' high-profile and demanding special duty assignments, the service is paring down the billets that qualify as special duty to just three and planning major rewrites to the assignment manual.

At the guidance of Commandant Gen. Robert Neller, the Corps is rolling out a new strategy in which only the jobs of recruiter, drill instructor, and Marine Security Guard detachment commander fall under the category of special duty assignments.

The roles of combat instructor, guard with Marine Corps Security Force Regiment, and Marine Security Guard watchstander are being moved into a new category of “Type 1” screenable billets with a condensed screening process and potential changes to assignment criteria and incentives.

The major changes will begin to take effect in January 2018 as the Marine Corps begins the service-wide screening process for the next group of Marines assigned to SDAs, according to a Marine administrative message released Wednesday.

The results will begin to be seen in the October 2018 SDA classes, said Col. Rudy Janiczek, Head of Enlisted Assignments for the Marine Corps' Manpower Management Division. A “sundowning” process will ensure that no Marines currently serving in SDAs or selected for them will see any changes as the Marine Corps executes the shake-up.

In an interview with Military.com, Janiczek said the current special duty assignment process locks Marines selected for screening into an 18-month hold in which they cannot deploy with their units or even be reassigned locally.

According to numbers provided by the Corps, the number of Marines who get locked into this screening process each year is not insignificant: an average of 8,600, or nearly 5 percent of the entire active-duty force. Making the planned cuts to the special duty assignment category will limit the screening process to an annual 5,230 Marines, a reduction of 40 percent.

“We've got a lot of billets currently categorized as SDAs and it affects a lot of our careerists and it does have some impact on the operating forces,” Janiczek said. “By recategorizing these without completing disincentivizing … I can screen for basically the same types of things using a differently protocol for doing that, select quality people, and make these assignments in a much more efficient way.”

For the billets being moved into a new category — Marine security guard watchstander, combat instructor, and Marine Corps security forces guard — the screening time will shrink to several months, he said, minimizing Marines' time on the sidelines.

The jobs categorized today as special duty assignments come with a unique array of challenges and benefits. Some, such as Marine security guard and recruiter, entail more independent assignments to regions typically removed from a larger Marine Corps unit. They require a three-year commitment and can come with specific restrictions on medical condition, family status, and even number and placement of tattoos.

But they also bring special perks and incentives. SDA Marines are entitled to additional monthly pay, which varies based on billet. Most SDAs also come with their own ribbon in recognition of service. And promotion authorities are given special guidance to consider service in special duty assignments as a positive factor for promotion.

There will likely still be incentives attached to the new “Type 1” category of billets, Janiczek said. But most of the details haven't been ironed out.

Ribbons for eligible billets that have been reclassified will likely still be awarded, he said.

As far as the pay, it's a little less clear. Details will be released in future Marine Corps messages as the service evaluates the billets and rewrites the manual, and it's possible there will be changes. The category of pay for the reclassified billets will change from SDA pay to something like “assignment incentive pay,” Janiczek said.

As to the promotability boost built into special duty assignments, Janiczek said officials would evaluate promotion guidance to make sure it was fair. But he stressed that there are other avenues available to Marines to improve chances of promotion.

“Notably, the promotion precepts that I have seen also mention the versatility of a Marine in terms of doing assignments, not limited to just kind of being in the battalion,” he said.

Among the most interesting changes in the new shake-up is the decision to separate the SDA category of “Marine Security Guard” — the enlisted troops responsible for safeguarding documents and personnel at U.S. embassies around the world — into two categories: watch stander and detachment commander. Watch standers, the actual guards, tend to be more junior, in ranks of corporal and below, while detachment commanders are staff noncommissioned officers and serve in a more supervisory role.

The decision to keep detachment commander as an SDA and reclassify watch standers brings the roles in line with other SDAs, which are typically reserved for more seasoned Marines.

“It's never been exactly on par anyway, because the young Marines that go off and do that are just at a different place in their Marine Corps career,” Janiczek said.

Watchstanders should be able to go out for another special duty assignment later on in their career, he added.

As for combat instructors, who teach at the Marines' East and West Coast schools of infantry, and members of Marine Corps Security Force Regiment, who guard nuclear ships and weapons, both draw almost exclusively from the infantry community, Janiczek said.

“[Drill instructors], recruiters, and Marine security guard detachment commanders perform exclusively outside their , and that's kind of an important distinction in terms of those duties,” he said. “All of those things are factors going in this direction.”

In addition, he said, the billets the service selected to remain as SDAs had a common factor: they are public-facing to a certain extent and require lengthy screening to ensure Marines with the right background and temperament are chosen.

“There are some things we have to look at very carefully before we put a recruiter out on the street, as opposed to someone that's working within the confines of the Marine Corps,” he said.

“We're putting an umbrella over these programs, to talk about them somewhat comprehensively,” Janiczek said.

It's also possible that tour lengths for some newly reclassified assignments will change. Until now, SDAs have typically entailed a three-year commitment. That will likely continue for recruiters, Marine security guard detachment commanders, and first-tour drill instructors, Janiczek said. Other billets are getting another look.

“If you are assigned to the school of infantry, you probably are going to have some Marines that need to stay for three years so they can get enough seniority to be a senior instructor. But maybe not everybody does,” he said. “We'll try to build some flexibility into that, and then you'll have a good, well-trained Marine go back out into the a little bit sooner, and go serve as a squad leader or other unit leader in the infantry.”

Last year, the Marine Corps leaders started down this path by reducing tour-length commitments for second-tour drill instructors from three years to two as they worked to recruit more of these experienced DIs.

All of these changes are taking place amid service struggles to recruit Marines for special duty assignments.

Marine Corps Times reported last year that the Marines were rolling out new volunteer rules for SDAs, allowing those who put in for special duty to have sway in choosing their assignment.

“After a period of some twelve years of combat operations, we have an entire generation of Marines who are not familiar with special duty assignments, who do not understand or consider special duty assignments as a necessary component of what we would consider to be a successful career,” Maj. Gen. Mark Brilakis, then deputy commandant for Manpower and Reserve Affairs, told the publication.

Notable exceptions are Marine security guard watch standers and Marine Corps Security Forces guards, which get most of their annual assignments in the form of accessions, from recruits who enlist for these positions, according to data provided by the Marine Corps.

With actual special duty assignments revised to three and other assignments requiring special screening grouped into separate categories, it's possible the remaining SDAs will get more attention from enlisted Marines and even prompt more volunteerism, an outcome Marine leaders would prefer.

With these changes, “special duty is once again special, if you will,” she said.