A Marine Corps recruiter called him ‘too fat,’ so this student lost 70 pounds to pursue his dream of enlisting

Staff Sgt. Roy Leverette is working with Wyatt Simmons to prepare him for life in the Marine Corps 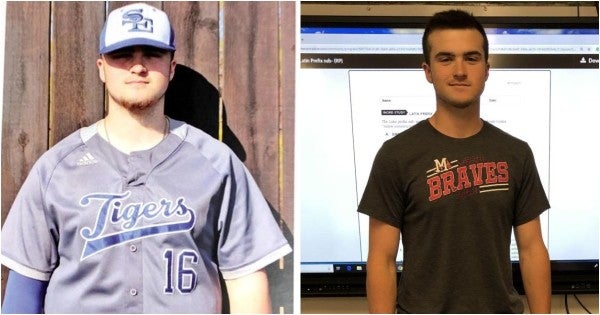 Staff Sgt. Roy Leverette was pretty blunt: “You're too fat.”

Leverette was a recruiter for the U.S. Marine Corps at a career fair when Southeast Lauderdale freshman Wyatt Simmons came up to him and expressed interest in becoming a Marine once he finished high school. At 250 pounds, though, Simmons was told he should join the Army or Navy instead.

“The first thing I look at is physical fitness,” Leverette explained. “He came over and I said, plain and simple, 'You're fat. This is not for you.'”

But Leverette read Simmons' face and saw someone who wasn't going to take that kind of statement from anyone. Now a junior, Simmons currently weighs 180 pounds thanks to an overhaul in his diet and fitness regimen. It's helped him as a baseball player for the Tigers, and it's helped him in other areas of life — and it all goes back to being called fat by Leverette when he was a freshman.

Following his freshman year, Simmons suffered a torn labrum in his shoulder, which prevented him from being active and caused his weight to balloon to 250 pounds. The summer of 2018 was when Simmons decided to take control and get his weight down to a level acceptable to the Marines. Fast food and soft drinks were out, grilled food, fruits and vegetables were in. Water was not simply a drink of choice, it was the only thing Simmons would drink.

In addition to adjusting his diet, Simmons also began working out at Fitness Depot twice a day, and he noticed the pounds beginning to drop. Not satisfied, Simmons began running 2 miles every day at Bonita Lakes Park in hopes of losing weight at a faster rate.

“Whether it was rain or flood, it didn't matter if I did it before or after (going to Fitness Depot) — I was going to get those 2 miles in,” Simmons said.

Eventually, Simmons reintroduced himself to Leverette, and with a new and improved physique, Leverette said he initially didn't recognize Simmons from the career fair.

“I took him seriously after that,” Leverette said. “I saw this was something that he really wanted to do, and now I use him as an example. I say, 'Look at this guy named Wyatt. I called him fat, and he wanted it, and he went out there and was determined.' He's the most improved person I had ever seen in Meridian, Mississippi.”

First on the agenda was putting Simmons through the Marines' Initial Strength Test, which tests how fast you can run a mile and a half, how many pull-ups you can do and how many crunches you can do. Leverette had Simmons run Bonita Lake, and he clocked Simmons at approximately 11 minutes, well below the 12 1/2 minutes required to run 1 1/2 miles. Then, Simmons did 11 pull-ups, beating the required three, and approximately 78-80 crunches in two minutes, beating the required 44.

“Once you pass those, we look forward to improve those numbers and making them better,” Leverette said.

So Simmons began participating in physical training with the Marines, which further solidified his dieting and exercise plan.

“They put you through good workouts that will kill you,” Simmons said.

Being able to join the Marines wasn't the only benefit to the diet and fitness overhaul, Simmons stressed.

“Dude, I ain't going to lie, I feel better, I move a lot faster, and I'm more energetic,” Simmons said. “The way I do things is quicker. I used to slug around, and I feel a whole lot better knowing I'm taking care of my body the way I'm supposed to.”

That's translated to the diamond, as Simmons' overall game has improved as a result of his slimming down. Simmons splits time between catcher and outfield, and his improved physique has allowed him more flexibility at each position to go along with the increase of speed and stamina.

“It's made a big difference for him,” Southeast Lauderdale baseball coach Shay Cooper said. “He's always been able to hit, but (we wondered) where would he play defensively when it got time for him to play. Now, with him losing that weight, he's given us more options. He's really helped his case all the way around, not to mention whatever he's done for himself health-wise.”

While hand-eye coordination is its own separate tool, improved speed has improved his batting average a tick, Simmons said.

“I can tell I've beaten out a few ground balls to first base,” Simmons said. “I can get more out of myself for the team, so I'm not just helping myself but I'm helping the team.”

While Simmons' introduction to Leverette felt like a slap in the face, the two are now on good terms. Leverette has since moved out to California, but he and Simmons still communicate regularly.

“Him pushing me and making me a lot better has helped me, and we turned out to be good friends,” Simmons said.

But Leverette credits Simmons' self-motivation as the main reason for his transformation.

“He took his own initiative and did it by himself,” Leverette said. “It wasn't like I helped him out.”

Still, Leverette said he tried to keep pushing Simmons once it was clear Simmons would not be denied the chance to be a Marine.

“I'm his mentor, and I give him advice, and I've been pushing him since the day he stepped in my office and had lost 60 pounds,” Leverette said. “That was impressive. For that day forward we've had a bond. We're on the same path, in that we're both hungry, and he's a hungry individual.”

The next goal for Simmons is to get his weight down to approximately 170 pounds, which is where he would like for it to remain. While some might joke with him about being anorexic, Simmons brushes those accusations off.

Hopefully, his story will serve as an example to others that perseverance and determination pays off.

“I love being active, and I love pushing myself,” Simmons said. “I love nature. I ran the 5-mile trail one time and was like, 'Wow.' You can't imagine what you can do if you have the right mindset, hard work and determination.”