Firefighters and paramedics responded to a U.S. military base in Virginia on reports of an unknown substance reportedly contained in an envelope that was... 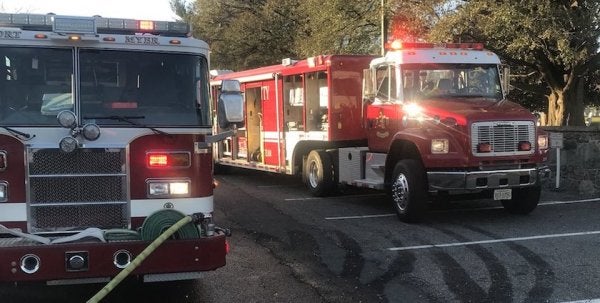 Firefighters and paramedics responded to a U.S. military base in Virginia on reports of an unknown substance reportedly contained in an envelope that was opened at the base on Tuesday afternoon.

An emergency task force was sent to Joint Base Myer-Henderson Hall after an “envelope containing an unknown substance” was opened, according to a statement from a Marine Corps spokesperson that was cited by a Washington Post reporter.

Engine 161’s crew evacuated and decontaminated 11 patients from the hazard area, all evaluated by EMS-3transported to area hospital. All units have picked up, scene turned over to @FBIWFO @FBI pic.twitter.com/cAbNW75zOJ

At least 11 people fell ill and were being treated for symptoms that included nosebleeds and burning sensations. Three patients were taken to hospitals and were said to be in stable condition, according to the Arlington Fire Department.

The building was evacuated and a decontamination station was deployed. FBI assets were also called to the scene, according to the Marine Corps.

Henderson Hall is located near the Army's Ft. Myer, and is the headquarters of the Marine Corps. It is also located next to the Arlington National Cemetery and nearby the Pentagon.