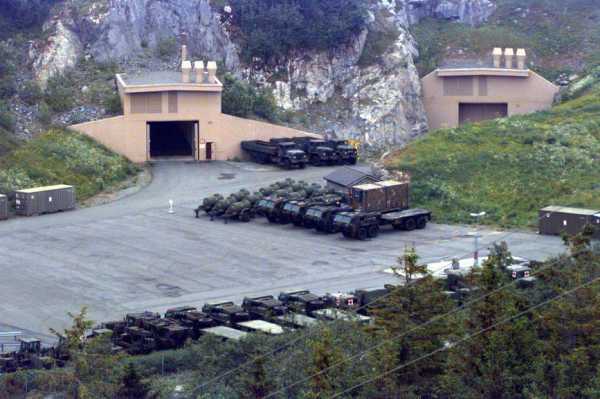 A major Marine Corps force redesign is bringing big changes that could soon filter down to a secretive cave complex in Norway that the Corps has used since the Cold War.

Berger has said the Corps plans to cut its overall force 7 percent by 2030, shedding infantry battalions, eliminating helicopter squadrons, and getting rid of all of its tanks.

Marines in California have already said goodbye to their tanks, and more could leave soon, including those in a cave complex in Norway's Trondheim region, where the Corps has stored weapons and other equipment for decades.

Related: Marines are pulling even more tanks out of caves in Norway for war games on Russia's doorstep

The Corps' Force Design 2030 “is a worldwide program aimed to make our force posture around the globe even more strategic and effective. As such, it calls for a divestment of certain capabilities and increases in others,” Maj. Adrian Rankine-Galloway, a spokesman for Marine Corps forces in Europe and Africa, said in an email.

The Marine Corps Prepositioning Program in Norway “will continue to support U.S. Marine Corps forces for bilateral and multi-lateral exercises” in European and Africa, Rankine-Galloway said.

Rankine-Galloway didn't say what equipment that might be, but in the Force Design 2030, Berger said the Corps is “over-invested in” weapons like “heavily armored ground combat systems (tanks) [and] towed cannon artillery” and had “shortfalls” in rocket artillery, air-defense systems, and long-range unmanned aircraft.

Marine Corps leaders say savings from those cuts will pay for high-tech gear needed to counter China, Russia, and others.

The Marines' underground storage in Norway's Trondheim region dates to 1982, when the U.S. and Norway agreed to preposition supplies and equipment in six climate-controlled caves there, allowing the Corps to store equipment closer than the U.S. East Coast and “minimize the time necessary to form for combat.”

Much of the equipment there was withdrawn for the invasion of Iraq in 2003. A decade later, the Corps expanded its stocks, reportedly allowing tanks and other heavy vehicles to be stored there for the first time.

Since then, equipment has been taken out for exercises around Europe — in 2018 and 2019 the Corps shipped tanks from the caves to military exercises in Finland.

Changes to what the Marines store in Norway would come as the Corps alters its troop presence in the country.

Hundreds of Marines have been stationed in Norway on six-month rotations since 2017, but Norway's military said earlier this month that the U.S. would reduce that force.

Rankine-Galloway told several outlets the Corps wasn't drawing down but rather adopting shorter, “episodic” deployments aligned with exercises — sometimes bringing more troops to the country than are there now — that allow it to balance Arctic warfare training with larger-scale training “as a naval expeditionary force.”

“We expect U.S. Marine Corps forces deployed to the Nordic region to train and be prepared to fight in accordance with the Commandant's vision for the force and that this transformation will make both U.S. Marine Corps, allied, and partner forces more lethal and capable together,” Rankine-Galloway told Insider.

Related: Marines insist ‘we are not drawing down’ amid changes to Norway rotations

The Marines' year-round presence in Norway angered Russia, whose border with Norway is near sensitive sites on the Kola Peninsula belonging to the powerful Northern Fleet, which oversees Russia's nuclear ballistic-missile subs.

Recent Northern Fleet activity, especially of its submarines, has concerned NATO. Norway and its neighbors have been especially wary of Russia's tests of new missiles.

Russian missiles have changed “the strategic game” in the region, according to Thomas Nilsen, editor of Norway-based news outlet The Barents Observer.

“Living on the Norwegian side of the border, we don't see a scenario of a Russian military invasion trying to capture” northern Norway, Nilsen said at an Atlantic Council event in February.

Weapons like the Kinzhal hypersonic missile could be launched from Russian fighter jets and within minutes strike airbases in those Scandinavian countries, Nilsen said.

Aircraft at those bases, like Norway's F-35s, are “what Russia is afraid of,” Nilsen added. “Those capabilities on the Scandinavian side that might … disturb their deploying of the ballistic-missile submarines.”