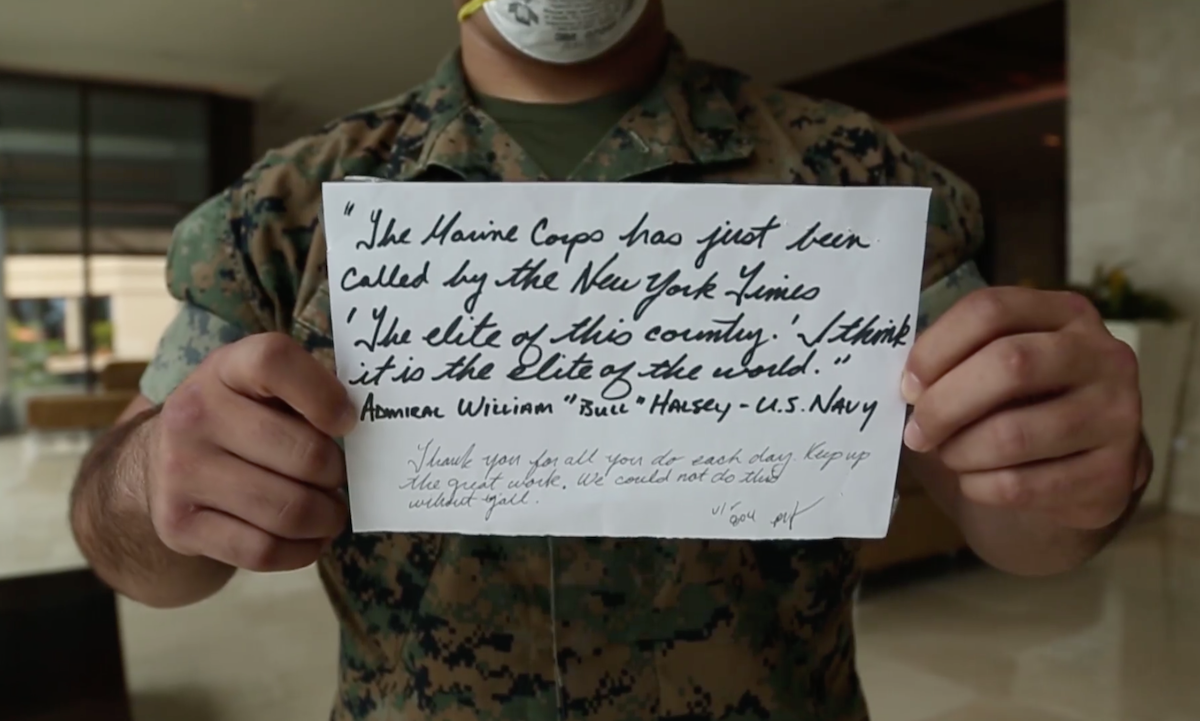 Europeans and Americans have been taking to their windows and balconies to applaud health care workers on the front lines of the novel coronavirus crisis. Now, sailors on a tiny Pacific island are doing the same for Marines who've come to their aid.

Crew members from the Navy's aircraft carrier Theodore Roosevelt coordinated a thank-you cheer for Marines with 3rd Law Enforcement Battalion. The Japan-based Marines arrived in Guam in early April and have been assisting the more than 4,000 members of the Roosevelt's crew who have faced weeks of quarantine after a widespread outbreak on their ship.

Capt. Vicente Huerta, a military police officer with the battalion, described the moment in a Navy video.

“They all came out on their balconies and just started cheering and clapping,” Huerta said. “I started getting goosebumps, and I was like, 'OK, this is a different type of deployment.'”

The Roosevelt has been sidelined in Guam since late March, when cases of COVID-19, the illness caused by the novel coronavirus, began spreading. Now, 840 sailors have tested positive for the illness, including Aviation Ordnanceman Chief Petty Officer Charles Robert Thacker Jr., who died in mid-April.

Huerta called his mission of looking out for the crew members living out their two-week quarantines in hotels and other facilities on Guam “probably the most gratifying thing I've done so far in the Marine Corps.”

The captain said they've been flooded with letters of appreciation from the crew. The video shows messages left by the crew thanking Marines for making their food, delivering laundry and providing other services while they're in Guam.

“We could not do this without you,” one wrote.

“Thank you,” another said, “for everything you all have done and sacrificed to help us in this time of need.”

Aside from the law enforcement Marines, about 230 members of the Marine Corps' 3rd Medical Battalion have also deployed to Guam to assist the carrier's crew.