They wore sneakers, carried knives and rifles and dynamite, but they planned to use piano wire — the “Mafia necktie” — to kill. 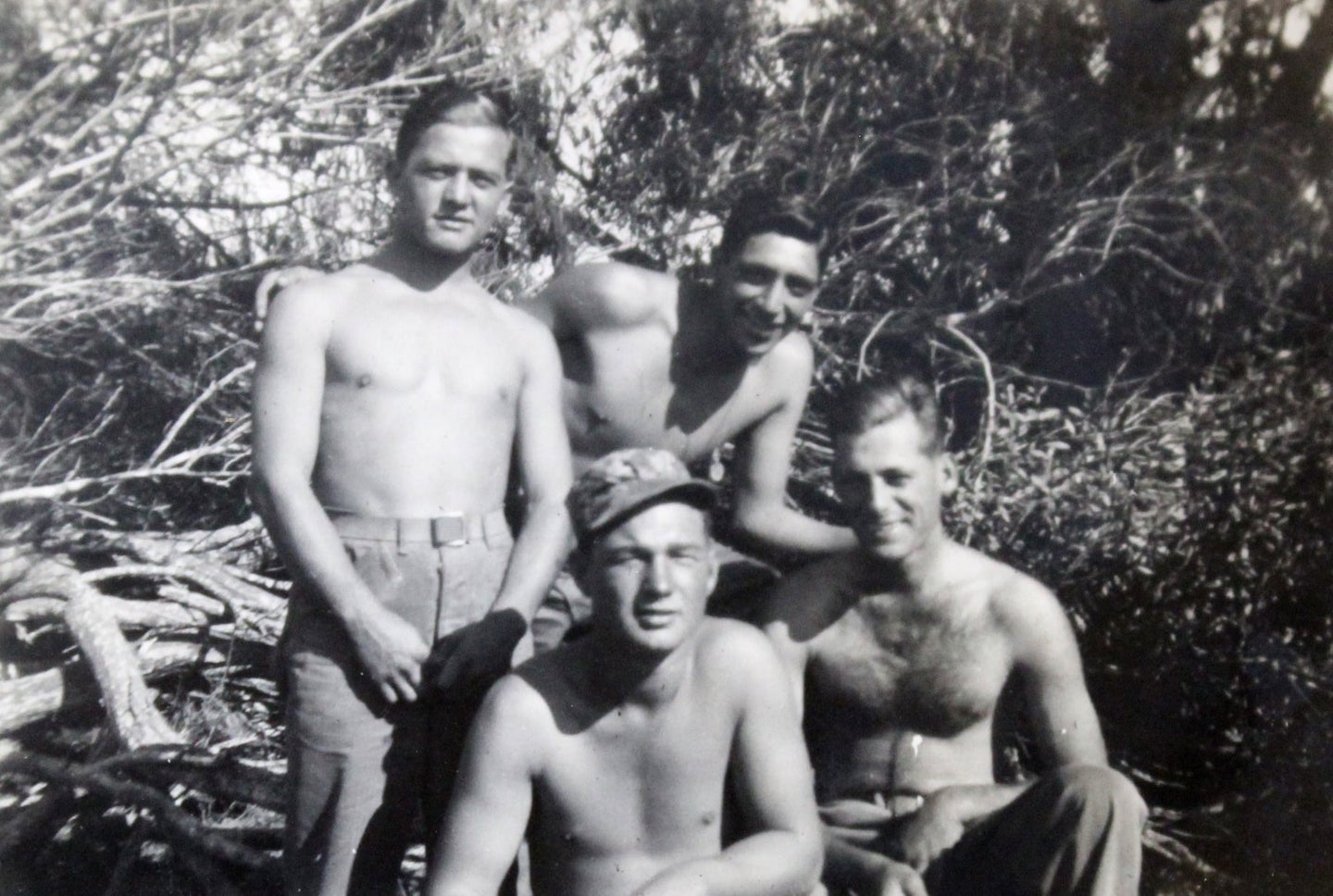 They moved noiselessly through the jungle in their unconventional military footwear. They carried knives and rifles and dynamite, but they planned to use piano wire — the “Mafia necktie” — to kill.

The Marine Corps magazine The Leatherneck would call them “Tachovsky’s Terrors” in a December 1944 issue (their leader was Lt. Frank Tachovsky). But their fellow Marines in the 6th Regiment knew them as “The 40 Thieves” — a Marine platoon being about 40 men.

Herbert McBride, who settled in southern Oregon after hanging up his combat sneakers, was one of the Thieves. A Memphis native, he joined the Marines shortly after the Japanese attacked the United States at Pearl Harbor on Dec. 7, 1941. McBride offered up a fake birth certificate that put his age at 19. He’d actually just turned 15.

He quickly became a marksman — “He could shoot a BB [ball] off your shoulder,” his stepdaughter Diana Dawson says — and found himself recruited onto the elite Thieves team. His fellow Marines had no idea how young he was.

“He carried himself as if he was older,” says Joseph Tachovsky, Frank’s son, who got to know McBride’s Thieves pal Marvin Strombo.

The teen Marine fought on Tarawa, where he was wounded, and Guadalcanal. Then in June 1944 McBride and the rest of the Thieves platoon landed on Saipan, a Japanese bulwark during World War II and a necessary stepping-stone for the Allies on the way to Tokyo.

The Thieves, a scout-sniper platoon, were charged with gathering intelligence and sowing chaos behind enemy lines. This meant making Japanese soldiers mysteriously disappear, one by one, in the night. It meant blowing ammunition stores sky high and tracking troop movements.

The Thieves could hide for hours within whispering distance of the enemy, their dog tags wrapped in tape to prevent even the tiny click of aluminum against collar bone.

The Leatherneck heralded them as “the craziest, fiercest, most lovable Marines on the island.”

Such was the official Marine publicity spin, but the 40 Thieves themselves never claimed to be engaged in fun and games. They undertook brutal, bloody tasks on Saipan, actions that would haunt them.

“Most of these guys never talked about the war,” says Joseph Tachovsky. “They spent their whole lives trying to forget.”

A few years ago, Joseph tracked down the few surviving platoon members for what would become the nonfiction book “40 Thieves on Saipan.” He found men who had suffered terrifying nightmares for six decades. Tachovsky learned that a couple of the Thieves drank themselves to death at young ages.

Tracy Metzger, Dawson’s daughter, said in an email that McBride “was a [wonderful] grandfather but he had his demons.” Diana Dawson acknowledges that “Mac” struggled with the classic symptoms of post-traumatic stress disorder, though he didn’t recognize what it was. “They didn’t know about that back in those days,” she says.

Despite the traumatic nature of his World War II exploits, Herbert Conway McBride decided to make a career in the Marines. And so just a few years after V-J Day, he was back in combat, this time in Korea, now fighting communism instead of fascism.

He took part in the Battle of Chosin Reservoir, after more than 100,000 communist Chinese soldiers suddenly poured over the border to save North Korea from collapse. The fighting took place in severe winter conditions, with the vastly outnumbered 1st Marine Division engineering a breakout that saved it from annihilation. McBride survived the battle but ended up with frostbite.

The first field surgeon who saw McBride wanted to amputate his feet, Dawson says. Another doctor stepped in at the last moment, insisting amputation wasn’t necessary.

McBride would regain use of his feet, and he made sure he made the most of them. After leaving the Marines in 1972, he taught dance at an Arthur Murray studio.

He loved to sing as much as he loved to dance. Whenever Dawson hears a Dean Martin song, she says, “it reminds me of him.”

Mac was a disciplinarian as a parent: Dawson says she was “the only kid who went to school every day with military creases in my uniform blouse and a spit shine on my Oxfords.” He also was a loving parent and a great prankster, she adds.

She misses him every day.

McBride did two tours in Vietnam in the late 1960s before he retired from the Marines as a staff sergeant. During his long military career, he was awarded a Purple Heart, the Navy Commendation Medal, and many other service medals.

Related: ‘I survived the foxholes of Guam, I can get through this coronavirus bullsh*t,’ says 95-year-old vet who battled COVID-19 and won

Only 47 when he left the Marines, he earned his GED and joined the U.S. Postal Service. He wanted to start anew, but he wasn’t sure how.

“I don’t know anything about civilians,” Dawson remembers him telling her. “I don’t know how to talk to them.”

He found a way, building a new life outside the Marines Corps without losing touch with the decades-long military experiences that defined him.

Mac finished up his career in California as a postmaster and retired to Williams, Oregon.

He had left the Marines, but his time in the service never left him. War had molded Herbert McBride in a way that only other combat veterans could truly understand.

“You’re different,” his former commanding officer, Frank Tachovsky, once wrote in a personal letter, referring to what happens to your “soul” after you meet the enemy up close in battle. “You just don’t know who you are anymore.”

All of the 40 Thieves struggled with what they went through on Saipan and in other battles, Frank’s son, Joseph, says.

Still, the younger Tachovsky adds, they knew that what they did “had to be done” — for their country and for the generations that followed.