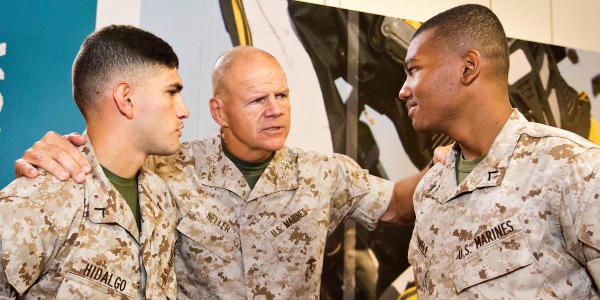 The Marine Corps wants better enlisted leaders — and it's on the hunt for a diagnostic tool that can help find them.

In October, the service published a request for information regarding an emotional intelligence test that can identify “career Marines who may develop into ineffective or counterproductive leaders.”

Officials said the Corps plans to use such a tool during a study period of at least five years, beginning in June 2018, to determine if it can help the service root out problem leaders.

“In his 'Message to the Force 2017,' [Commandant Gen. Robert Neller] stated that maintaining a force of the highest quality is one of his key areas of focus,” Col. Rudy Janiczek, head of enlisted assignments at the Marine Corps' Manpower Management Division, told Military.com in a statement.

“This effort will assist [Marine Corps Manpower and Reserve Affairs] in determining the metric for how we recognize, promote and retain those who are the most competent, mature and capable leaders,” he said.

The web-accessible test the Corps wants would be administered upon a Marine's first re-enlistment, when he or she begins to assume more significant leadership roles, Janiczek said.

According to the contracting document, the service wants 3,600 emotional intelligence tests, sufficient for the fiscal 2018 re-enlistment period. The contractor selected to provide the tests will produce 300 full reports on a sampling of test participants so that Marine officials can study the data and assess its value.

The idea to implement an emotional intelligence test didn't begin with the Corps, said Dr. Eric Charles, section head for Testing Control at the Manpower Plans and Policy Division. In a statement, he said other federal entities, including Marine Corps Forces Special Operations Command, had already implemented similar measures.

“Before we planned this effort, we reviewed lessons learned in those efforts, with a focus on what has been successful in other military, paramilitary, and law-enforcement contexts,” Charles said.

“Despite the impressive effort of such work, we are not willing to take any of that success as a guarantee that such efforts will work in the Marine Corps,” he said. “That is why we have chosen to pursue our own internal studies, rather than risking a premature leap to operational usage.”

The assessment period of at least five years means no currently serving Marine will face career repercussions as a result of taking the test upon re-enlistment, officials said.

Data in the study period won't be used for assignment or promotion purposes. But, a Marine Corps manpower official said, if the effort is successful and the test is adopted as part of the leadership screening process, the data may be used to “better align people and positions to ensure the greatest opportunities for success.”

Timing — ensuring a Marine gets the right job at the right point in his or her career — is also a focus, the official said.

While officials cited Neller's goals for the force rather than any specific event, the announcement does come in the wake of a scandal involving multiple allegations of hazing by Marine Corps drill instructors at Parris Island, South Carolina.

Earlier this month, the drill instructor facing the most severe allegations of misconduct, Gunnery Sgt. Joseph Felix, was convicted of hazing three Muslim recruits and assaulting others during his year on the drill field. He was sentenced at general court-martial to 10 years' confinement and a dishonorable discharge.

The Corps is planning a “methodical and deliberate approach” in studying the possibility of using a tool like a toxic leadership test, officials said.

No operational changes are planned ahead of data collection.