The three combat logistics regiments were stood up after 9/11. The 7th ESB bridge company dated back to Vietnam. 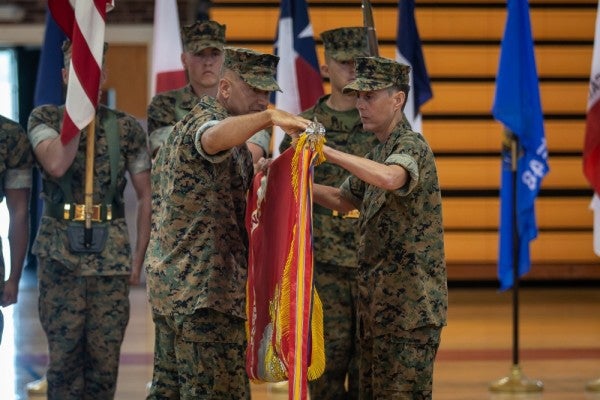 At least four Marine Corps units have cased their colors in recent weeks as part of an aggressive plan to reshape the force to take on future threats.

Two combat logistics regiments — one on the East Coast and one on the West — were the latest units to deactivate last week as the Marine Corps pushes forward with a years-long reorganization plan. Combat Logistics Regiment 25, based out of Camp Lejeune, North Carolina, and CLR-15, out of Camp Pendleton, California, were both deactivated in July 1 ceremonies.

The units' closures followed the June 22 deactivation of the Pendleton-based Bridge Company, 7th Engineer Support Battalion, and the May shuttering of CLR-35 in Japan.

The three combat logistics regiments were all stood up after the 2001 terror attacks in the U.S. The 7th ESB bridge company dated back to Vietnam.

“The commandant's plan is all about being a more mobile, lethal force. For us, that means small teams to get the job done,” Col. Denise Mull, CLR-25's commanding officer, said at that unit's deactivation ceremony. “We're excited to see who can step up to fill the role that this regiment filled.”

The supply and maintenance battalions that fell under the three combat logistics regiments will still exist, but now will be stand-alone units assigned to 1st, 2nd and 3rd Marine logistics groups.

Marine Commandant Gen. David Berger announced in March his sweeping plan to modernize the Corps for future fights. The plan calls for shedding about 16,000 Marines from the ranks by 2030.

The Marine Corps will no longer operate tanks or bridging companies as part of the plan, which also calls for fewer law enforcement personnel, infantry Marines and F-35 Joint Strike Fighter jets. The service recently released instructions for the more than 1,300 Marines whose jobs will be affected by the changes. They've been directed to consider moving into other fields within the Marine Corps or even joining other military branches.

Cost savings from those changes will be used to pay for equipment for long-range precision fires and other technology the Marine Corps will need to face off against more sophisticated adversaries, such as Russia or China.

“We're not saying that a tank or bridging company isn't of value,” Lt. Gen. Eric Smith, the head of Marine Corps Combat Development Command, said during a recent interview. “… It's just that for the future fight, [those military occupational specialties] are of less value than the things that we need most.”

The personnel and equipment affected by the deactivations are being distributed across the Marine logistics groups, according to service news releases. Col. Joon Um, CLR-35's commanding officer, said of his unit's deactivation that the move allowed for greater independence and agility so Marine leaders can respond more rapidly to changing conditions.

“This deactivation was absolutely necessary as the Marine Corps grows in a new direction to face different challenges,” Um said.