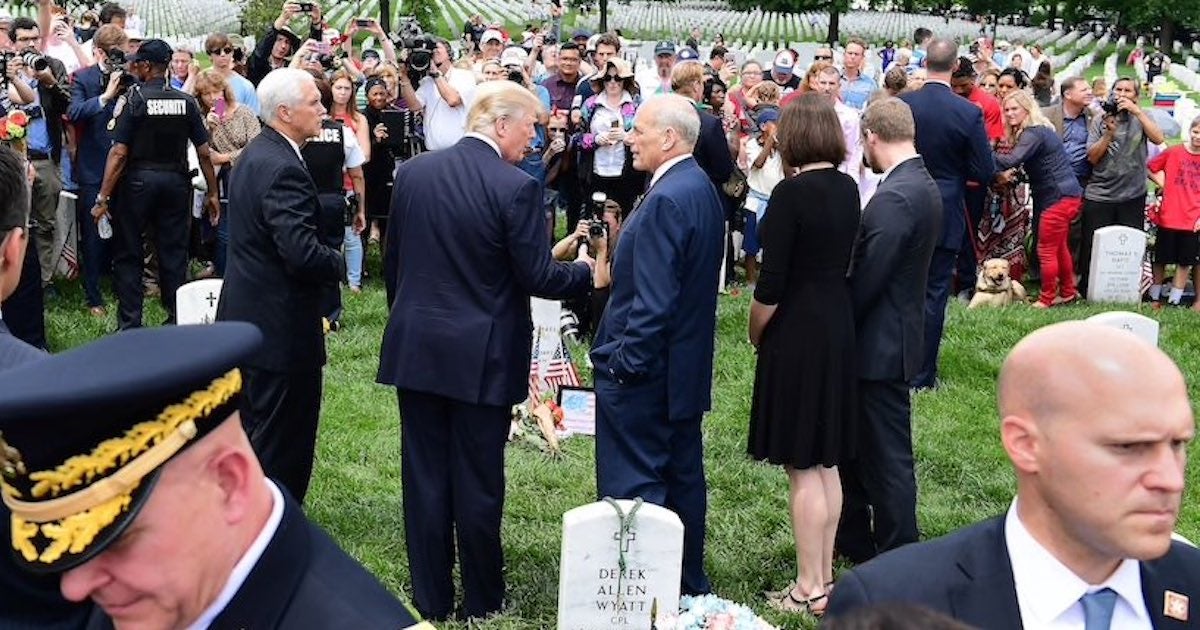 A Marine Corps veteran and Gold Star widow sharply criticized President Donald Trump after seeing a photo of him at her husband's grave in Arlington National Cemetery.

Kait Wyatt's husband, Marine Cpl. Derek Wyatt, was killed in combat in Afghanistan in 2010. Amid reports that Trump questioned the sacrifice of a fallen Marine in remarks to his father at Arlington, she came across a photo of the president at her husband's grave.

“I was instantly furious,” she told CNN's “Right Now with Brianna Keilar” Tuesday.

The day before, Wyatt shared the photo, which she had not seen before, and tweeted for the president to “get off my husband's grave” and “get out of Arlington,” stressing that the cemetery “is not the place for politics.”

Absolutely NOT. Get off my husband’s grave, get out of Arlington, that is not the place for politics. #NeverTrump #DerekWyatt #VeteransAgainstTrump pic.twitter.com/WQXoS3U9n3

The photo is one of several similar photos from the visit to Arlington on Memorial Day in 2017, the same visit in which Trump, according to a recent report in The Atlantic, questioned retired Marine Corps Gen. John Kelly about his son Robert's sacrifice while visiting his grave, telling Kelly, “I don't get it. What was in it for them?”

Kelly did not comment on the report, which also featured explosive claims that the president called fallen service members “losers” and “suckers,” but a friend and retired four-star general told The Atlantic's Jeffrey Goldberg that the president “can't fathom the idea of doing something for someone other than himself.”

Kelly's son 1st Lt. Robert Kelly was killed while on patrol in Afghanistan in 2010.

The president and other members of the White House have repeatedly denied the accusations presented in the Atlantic report.

Kait Wyatt, widow of a Marine veteran, reacts to Pres. Trump’s alleged remarks on troops when visiting Arlington National Cemetery in 2017. “You can’t stand on the graves of better men who fought and died for this country while you rip apart that country with your incompetence.” pic.twitter.com/HdrsaTqDkr

Wyatt said that when she looked at that photo, she was upset. “It really triggered me as a widow, it triggered me as a veteran,” she told CNN, explaining that “I absolutely discourage political moves using veterans and our killed in action and our POWs” for political purposes.

“What I see in this picture is a father grieving with a person who is willing to use this opportunity as a photo op because this was obviously staged and obviously planned,” she said of Kelly.

She strongly defended Kelly after Trump criticized him Friday following the Atlantic report, saying that she respected him and that as a Marine Corps general, “there is an immense amount of pressure that he has endured and persevered through in his life that Trump could never even imagine.”

“This politician took a picture with my husband's name and tombstone in it to glorify his position to veterans,” Wyatt said. “You can't stand on the graves of better men who fought and died for this country while you rip apart that country with your incompetence and unqualified presence within a position of leadership.

“The sacred ground that Arlington is for us is not a place for political statements,” she told CNN Tuesday. “It's a disgrace to those who have served and especially those who have died.”