Florida resident Scott Lahodik was just doing his job — diving for golf balls — when a 10-foot alligator latched onto... 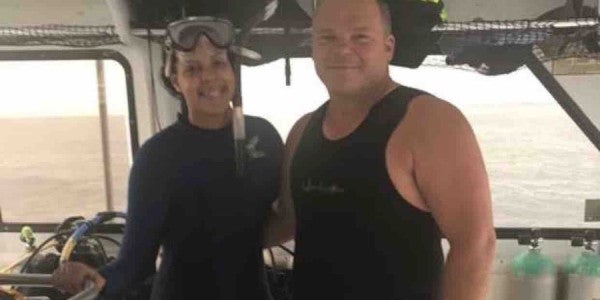 Florida resident Scott Lahodik was just doing his job — diving for golf balls — when a 10-foot alligator latched onto his arm Friday.

The alligator rolled over and over as it took him to the bottom of the 10-foot-deep lake at the Palms Course, Rotunda Golf & Country Club.

Lahodik had the presence of mind to go limp, to make the alligator think he had died. He wanted to prevent further shredding of his arm, Maritza Lahodik said. The animal didn't loosen its grip.

“I started punching him up by the eye, and then he let go,” Lahodik said.

He swam 10 yards to shore, fearing all the time the alligator would latch onto his legs.

Lahodik crawled onto land and didn't stop. Nobody was around, so he drove away on his golf cart as bleeding continued and his vision dimmed. He felt faint.

He made it to the golf club, where he had a woman call 911. He wrapped a towel around his injured arm.

On Sunday, his condition improved from critical to serious. His arm is shredded, as if he punched it through a glass window, Maritza Lahodik said. Surgeons put in hundreds of staples to bind the wounds.

“The real problem is the potential for infection,” Maritza Lahodik said. The alligator's mouth was filled with numerous bacteria and when they went down, they stirred up the muck on the bottom of the lake.

“The main risk is infection and losing his arm.”

Scott Lahodik spent a restless night Sunday, Maritza Lahodik said. She's been at his side since the incident.

The Florida Fish and Wildfire Conservation Commission has removed the alligator.

In January, the couple left Jacksonville and moved west of Sebastian to the Vero Lake Estates subdivision to have an easier life. The last of their seven children had grown up and Maritza Lahodik was no longer home-schooling them, she said.

For the past 30 years, he has worked as a contractor for golf courses in Florida and the eastern United States, from New York to the Florida Keys.

After leaving the military, he has worked to retrieve golf balls or golf carts from lakes and water hazards.

Then came 1 p.m Friday. As soon as she heard what happened, she hurriedly drove “in a daze for three hours” to get to him.

“This the first time he has been attacked,” she said. “He encounters them (alligators) on a regular basis, and he knows how to respect their areas.”

Alligators usually are most active in the early morning and later afternoon. And he is aware when it is alligator mating season or when a mother alligator is guarding its infants, Maritza Lahodik said.

“He is aware of their habits,” she said.

Her son, Richard Alan Klatt, is taking care of their home and has set up a GoFundMe site to help pay for medical bills.