A Marine Corps veteran showed up to a George Floyd protest in Las Vegas heavily armed, wearing tactical gear, night vision goggles and insignia that suggested he was a federal agent 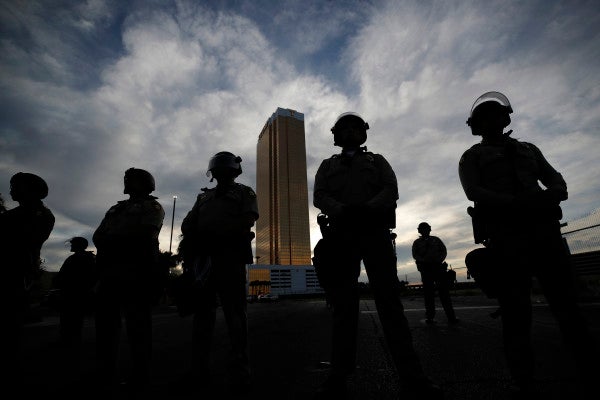 A U.S. Marine Corps veteran showed up to a George Floyd protest in Las Vegas heavily armed, wearing tactical gear, night vision goggles and insignia that suggested he was a federal agent.

He even stood side by side with officers in a “skirmish line,” facing agitated protesters.

But he isn’t an agent or an officer, and this week Zachary Sanns was arrested on a federal charge of false impersonation of an officer or employee of the United States, according to court documents.

Investigators also learned he was married to a Metro Police officer, and had illicitly embedded himself in her patrols in the past. He also tried incorporating himself in department training.

A Las Vegas Review-Journal photograph showing Sanns’ tattoos led to the investigation that uncovered the alleged crime. The images quickly spread on social media, with one tattoo identifying him as a Marine and another of the letters “SS” in a font used by Nazis in WWII to identify the Schutzstaffel, a military unit under the fascist regime.

Noticed one of my protest coverage photos circulating on Twitter – I took it on 5/30 near Container Park and noticed this guy behind a Metro police line, his armor carrier had "federal agent" on the back but not sure which agencies had deployed across downtown Vegas that night https://t.co/MsWBRSmbaU

People were outraged that a Nazi sympathizer had been in police ranks as they faced off with protesters already decrying police brutality and racism following Floyd’s death in Minneapolis, the complaint said. The logo, appropriated by an elite sniper unit in the Marines, has become a point of contention within the Marine Corps.

“This photo could have an immediate impact due to the public seeing the symbol and speculating the person in the photo to be affiliated with Nazi or racist groups and ideology,” the investigating agent wrote.

The issue was highlighted in news reports from 2012 after a photo emerged of the scout sniper unit in Afghanistan in which members posed in front of a flag with the “lightning bolt” SS.

After an investigation at the time, military officials concluded that the members had acted out of ignorance rather than racism, according to Politico.

Sanns was enlisted in the military from 2011 to 2016 and had contracted with the Navy in December. His military history wasn’t outlined in the complaint.

Sanns’ wife’s patrol unit was familiar with him, and they were under the impression he was some sort of federal agent, the complaint said. At least once he said he was in the CIA.

On May 30, Sanns and his wife’s sergeant were together when the unit was dispatched to downtown Las Vegas for the third day of protests, the complaint said. The sergeant recalled seeing Sanns heading to the protest with blue police lights on the grill of his truck.

When he confronted Sanns there, the sergeant said, Sanns told him that his boss in the federal government had allowed him to “self-deploy.”

At the protest, Clark County Deputy Chief James Seebok and Assistant Sheriff Chris Jones confronted him on separate occasions, asking Sanns what he was doing there. In explaining whey they believed he was an agent, one cited the patches on his tactical vest, and the other a badge.

Multiple agencies deployed to monitor the protests, which ended when police fired off tear gas when confronted with glass bottles and other projectiles.

They said Sanns told them he was a federal agent. At one point Seebok pulled him from the line of officers and told Sanns, “I don’t need you in the front line with an AR-15,” the complaint said. Additionally, Sans, who wore a mask, body armor and ballistic helmet, carried pepper spray, a handgun and multiple magazines, the complaint said.

Aside from the photos of his tattoos, Sanns was further identified after he’d filed a complaint stating that he’d been mistreated by Metro officers, who also had allegedly “blown kisses” at his wife during one of her patrols, in which he was present.

During his arrest, Sanns said he was an “off the books” federal contractor, but denied saying he was an agent, the complaint said. He said he’d asked his wife’s sergeant if they needed help at the protest, for which he allegedly replied “they could never turn down help from someone like (him).”

It wasn’t clear if Sanns had an attorney who could speak on his behalf.