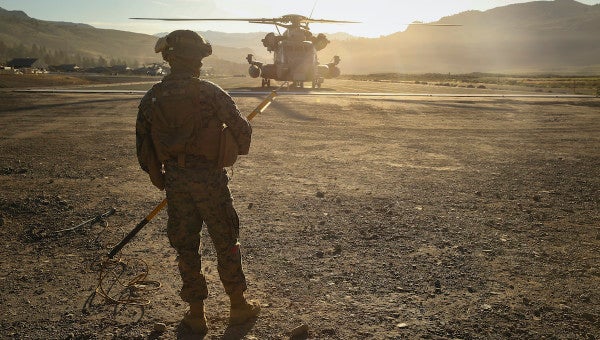 Pfc. Christian Bautista, 21, of Cook County, Illinois, was pronounced dead at the scene by responding paramedics, said Capt. Stephen Washburn, with the 1st Marine Logistics Group at Camp Pendleton. Bautista was killed at about 7:15 a.m., while riding in a M1151 Enhanced Armament Carrier vehicle that was doing tactical logistics support during a training exercise.

More details of the training exercise or what caused the accident was not immediately available but the warfare center — about an hour from Mammoth Lakes — is used to provide realistic training in more austere climates and terrain.

“Our primary concern is for the Marine we've lost, his family, friends, and fellow Marines and sailors,” Brig. Gen. Roberta L. Shea, commanding general of 1st Marine Logistics Group, said in a statement. “We have them in our prayers and will exhaust all resources to aid them during this difficult time.”

Bautista enlisted in the Marine Corps in September 2018. He graduated from Motor Transportation School at Fort Leonard Wood, Missouri, and was assigned to 1st TSB at Camp Pendleton in May 2019. His awards include the National Defense Service Medal and the Global War on Terror Service Medal.

The fatal accident occurred on the same day that three Army soldiers were killed when the Bradley Fighting vehicle they were riding in rolled into the water during a training accident at Ft. Stewart in Georgia.

The soldiers were with the 1st Armored Brigade Combat Team. Three injured soldiers were evacuated and taken to an Army hospital where they were treated and released. A third soldier was taken to another hospital but injuries are not considered life-threatening.

This is the fourth training fatality involving Marines — three from Camp Pendleton — this year.

Staff Sgt. Joshua Braica, a member of the 1st Marine Raider Battalion was killed in a rollover accident, April 13, at age 29. He was from Sacramento. On May 9, 1st Lt. Conor McDowell, 24, was killed when his Light Armored Vehicle rolled over in high grass and undulating terrain in the Las Pulgas area of Camp Pendleton during routine training. He was from Washington D.C. and on May 28, Lance Cpl. Hans Sandoval-Pereyra, 21, of Fairfax, Va., was killed when the Humvee he was riding in went off the road in the Northern Territory of Australia.

So far this year, more than a dozen service members have died in training accidents.