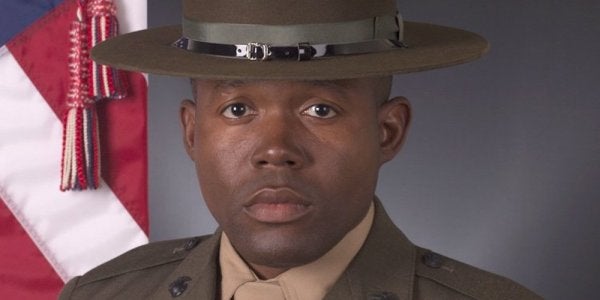 In September, Marine Sgt. Gary G. Wilson, of Murrieta, California, rescued two women trapped in their cars — one vehicle burning, the other threatened by fire — after a collision on the 163 Freeway.

Sgt. Wilson received the award for his heroic actions in rescuing the two women.

On Sept. 18, Wilson was riding his motorcycle to work when he came across a fiery crash on the 163 Freeway near the 52 Freeway, just south of Marine Corps Airstation Miramar.

According to the award citation, Wilson was driving southbound on the 163, when he observed a large box truck swerve in front of him. The truck veered to the right and slammed into a line of cars causing two cars to spin off the road into the nearby brush. The engine of one car burst into flames. Wilson rushed from his motorcycle to the burning car, where an injured woman was trapped inside and the car doors would not open.

“Without regard for his own safety and at great risk to his life from the quickly spreading flames, intense heat, smoke, and the possibility of explosion, Sergeant Wilson broke the passenger side window with his elbow, reached his body into the burning and smoke-filled car, and pulled out the trapped woman,” the citation reads. “Moments later, the car was engulfed in flames. Wilson then returned to the second car. After finding the doors stuck and the woman driver trapped by airbags, and the brush fire encroaching, he pried open the door, pulled out the woman, and carried her to safety.

“By his courageous and prompt actions in the face of great personal risk, Sgt. Wilson prevented the loss of life, thereby reflecting great credit upon himself and upholding the highest traditions of the Marine Corps and the United States Naval Service.”

Lt. Col. David Becker, commanding officer of the 3rd Recruit Training Battalion at the Marine Corps Recruit Depot, was among the speakers at Wednesday’s ceremony.

“Former president Ronald Reagan once said that some people spend an entire lifetime wondering if they made a difference in this world,” Becker said. “Marines don’t have that problem, and Sgt. Wilson doesn’t have that problem. He positively affected thousands of lives.”

Wilson enlisted in the Marine Corps in March 2010. He was assigned to the Depot as a drill instructor in March of 2016 after service overseas in Okinawa, Japan, and at Camp Pendleton. Wilson’s awards include two Good Conduct Medals, three Sea Service Deployment Ribbons, a National Defense Service Medal, and the Global War on Terrorism Service Medal.

“We extend our deepest condolences to the family and friends of Sgt. Wilson,” said Brig. Gen. Ryan Heritage, commanding general of the Marine Corps Recruit Depot. “Our thoughts and prayers are with them during this difficult period. This is truly the loss of a fine Marine, and he will be missed greatly.”