A new Marine Corps anti-drone system that attaches to all-terrain vehicles and can scan the skies for enemy aircraft from aboard Navy ships was responsible for destroying an Iranian drone. 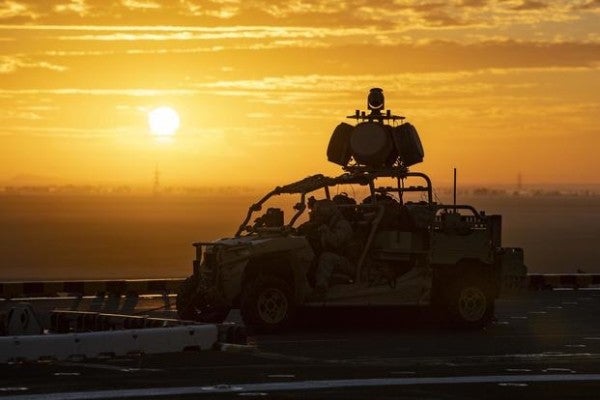 A new Marine Corps anti-drone system that attaches to all-terrain vehicles and can scan the skies for enemy aircraft from aboard Navy ships was responsible for destroying an Iranian drone, Military.com has learned.

The Marine Corps' Light Marine Air Defense Integrated System, known as LMADIS, jammed an Iranian drone that President Donald Trump said flew within 1,000 yards of a Navy warship in the Strait of Hormuz, a defense official said. The official spoke on the condition of anonymity due to the sensitivity of the mission.

The California-based 11th Marine Expeditionary Unit deployed to the Middle East with the LMADIS, the defense official said. That unit, which includes about 2,200 Marines, is currently on a six-month sea deployment with the Navy's Boxer Amphibious Ready Group.

“This is the latest of many provocative and hostile actions by Iran against vessels operating in international waters,” the president said. “The United States reserves the right to defend our personnel, our facilities and interests and calls upon all nations to condemn Iran's attempts to disrupt freedom of navigation and global commerce.”

The LMADIS is a maneuverable system installed on MRZR all-terrain vehicles. One of the MRZRs is a command vehicle and the other an electronic-warfare platform, according to a Marine Corps video that describes the system. It's typically used on the ground, but has recently been put to the test on several Navy ships.

The system uses a radar and cameras to scan the sky to detect drones and distinguish between friendly and hostile systems. Once it locates a threat, it uses radio frequencies to jam the drone,C4ISR reported in May.