Hunter and his wife Margaret spent $250,000 in donations on their children's private school tuition, lavish travel, expensive meals and clothing 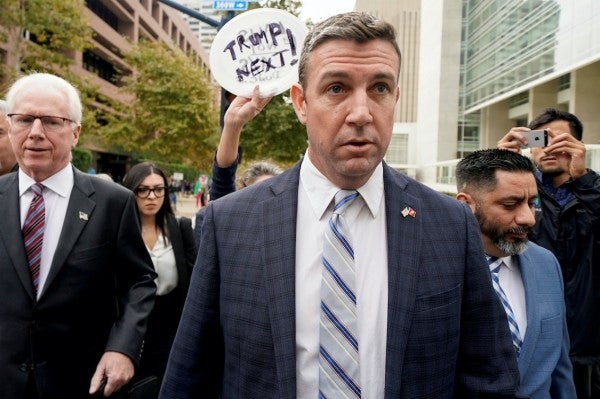 Hunter, 43, whose conviction set off a scramble within the Republican Party to succeed him while seemingly boosting Democrats' chances to gain his seat, notified Governor Gavin Newsom and House Speaker Nancy Pelosi by letter of his departure date.

Hunter's letters make no mention of his criminal conviction but instead cite his work in Congress on behalf of the military, war veterans, education and the maritime industry. An aide, Michael Harrison, said the Jan. 13 date held no significance.

Hunter and his wife, Margaret, were indicted in 2018 on charges of misappropriating $250,000 in campaign donations to pay for personal expenses, including their children's private school tuition, lavish travel, expensive meals at restaurants and clothing.

His wife pleaded guilty and named her spouse a co-conspirator in June, the same month prosecutors alleged in court papers that Hunter had spent campaign funds on extramarital liaisons with five women, all lobbyists or congressional staffers.

After long insisting he was wrongly accused and the victim of a politically motivated prosecution, Hunter pleaded guilty on Dec. 3 to a single count of conspiring to convert campaign funds to personal use.

He did so, Hunter said, to spare his family a trial. At the time, his representatives would only say Hunter would resign “after the holidays.”

Sentencing is set for March 17, and he faces a maximum penalty of five years in prison.

The conviction has set the stage for a wide-open race to succeed Hunter, who won election in 2008 to fill the seat his father had held until his own retirement that year.

Ten candidates for California's 50th congressional district, which leans heavily Republican, have qualified for the 2020 ballot so far.

Among them are former U.S. Representative Darrell Issa, a Republican who previously served in a neighboring district, and Democrat Ammar Campa-Najjar, who narrowly lost his bid for the seat in 2018 when Hunter was still under indictment.

In California's open-primary system, the top two vote-getters advance to the general election, even if they are from the same party. Democrats already hold a large majority of California's 53 seats in the U.S. House of Representatives.