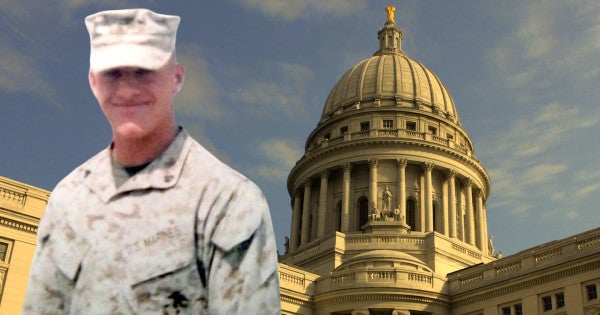 Eric Pizer is a father, a college graduate with an associate degree in criminal justice and a decorated Iraq War veteran who has always wanted to be a police officer.

When Pizer was 23, two days after he got back from being deployed in Iraq, he tried to de-escalate a drunken argument between his friend and a jealous husband after a night of drinking in the town in Boscobel in southwestern Wisconsin. Pizer said he and his friends didn't know one of the women with whom they were hanging out was married.

After Pizer heard the husband say, “I'm going to … kill you,” Pizer threw one punch and broke the man's nose, resulting in the substantial battery charge. He had no prior criminal record and hasn't committed any crimes since.

Pizer said it was a “knee-jerk reaction” and that he “didn't think about it, it just happened.” He still regrets the moment and is deeply remorseful for the pain he caused.

Since then, Pizer has gotten forgiveness from the man he punched, but the felony has tainted others' view of his character, caused tension in his relationships, prevented him from starting a career and disallowed him from being able to carry a firearm, which he would need to fulfill his dream of becoming a law enforcement officer.

“I've always been who I am,” said Pizer, of Edgerton. “And that felony is not who I am.”

Over the past nine years, Pizer worked with two lawyers, who are helping him pro bono, to try to reopen his case and plead the felony down to a misdemeanor or get a pardon, with little success.

“I still remember the day that Evers was elected,” said David Relles, one of Pizer's attorneys. “I called Eric because the case had just been dormant, and I said, 'Well, maybe you got a shot now.'”

On Monday, Pizer will be among a group of four people who will be receiving pardons for the first time in nine years in Wisconsin. Evers plans to sign their pardons Monday afternoon, invoking a constitutional power held only by the governor.

The three others who are set to receive pardons include Kevin Sorenson, Mwangi Vasser and Steven Nichols. Sorenson and Vasser were both convicted for selling drugs in their late teens. Nichols was convicted of a felony burglary when he was 21.

Sorenson, now 36, wants the pardon so he can serve in more positions in the military, including volunteering for deployment. Vasser, 40, hopes to become a military chaplain. Nichols, 62, wants to be able to hunt and travel to Canada for the Calgary Stampede, an annual rodeo, exhibition and festival.

“A pardon can profoundly impact a person's life by offering them an official grant of forgiveness,” Evers said in a statement. “(These four) have paid their debt to society, made amends, and contributed to their communities. I believe they deserve a second chance.”

No pardons under Walker

Walker was firm on his position of refusing to grant pardons during his tenure, despite repeated appeals from Pizer, his lawyers and letters from dozens of citizens — including veterans and Republicans — who asked Walker to give Pizer a pardon. Pizer's case even got coverage from the New York Times, which called his conviction a “one-punch felony.”

“I would say people recognized that he deserved a second chance,” Relles said.

UW-Madison professor Barry Burden, an expert on American politics, said Walker's stance on pardons was “exceptional” for Wisconsin, as both Republican and Democrat governors before him exercised their constitutional pardoning power.

Walker has said little about his rationale for his position. In late 2013, a Walker spokesman told the Wisconsin State Journal he had made the decision early in his administration and the position had not changed. Walker also told a TV reporter there were thousands of convicted felons “who probably have a compelling case to be made that we don't know about.” A spokesman said Sunday he had nothing more to add.

Evers re-started the pardons board in June, and his office had received 210 pardon applications as of Friday. Only five were heard before the board, one of which was rejected. On Oct. 14, 10 more requests will be heard by the board, and those hearings will continue every six to eight weeks, Evers spokeswoman Melissa Baldauff said.

Burden said the nine years of no pardons in the state likely created a “backlog” of people who will be eligible. He said there will be “people who were ignored by one governor and then given a pardon by the next.”

After being ignored by Walker for eight years, Pizer's pardon will restore his right to own a gun and pursue a career in law enforcement.

“I honestly don't really have those right words for how amazing this is for me finally,” Pizer said. “Not just for me, but for everyone else who has helped me along the way to get this for me. This is one huge, gigantic relief.”

Relles said there are several things that make Pizer an ideal candidate for a pardon.

For one, Relles said Pizer's charge could have been reduced to a misdemeanor instead of a felony.

Pizer said he was “extremely naive” in terms of how the legal system worked when he was 23. On recommendation from his lawyer at the time, he accepted a plea deal for the felony charge because under the deal he would only have to do probation instead of jail time.

But Pizer said he didn't fully understand the impact that having a felony on his record would cause.

With a felony on his record, Pizer hasn't been able to start a career, despite going to night classes to get associate degrees in criminal justice and health science. He's made “just enough to get by” in his jobs as a piano mover, a construction worker, a landscaper, a FedEx Driver and now working for a concrete company.

Having a felony also contributed to tensions in Pizer's marriage, which ended after four years.

If the 2004 incident had happened today, Relles said, it would have been a “classic case” for veterans court, which allows qualifying veterans to get charges dismissed or reduced after successful completion of a treatment program for addiction, mental health or other disorders.

Pizer served four years in the Marines, earning two commendations and the rank of corporal. He did two tours of duty, one in Kuwait and one in Iraq. The second deployment was voluntary, because he didn't want to abandon four new marines who were under his command.

In Iraq, every week rocket-propelled grenades would be shot at the base where Pizer was stationed. One had even exploded against a brick wall right outside his tent, blasting him out of his bunk.

Pizer said the stress of being only two days removed from a war zone contributed to his gut reaction of punching the husband, Steven Frazier, in the nose.

He said it was “hard to flip the switch” from being “always aware, always alert” while he was on duty to being a normal civilian. Today, soldiers are required to stay on base for around a month before returning home to “defuse” and “calm down,” Pizer said.

The punch left Frazier with headaches and breathing problems, but after a conversation in 2014 facilitated through a restorative justice program, the two men were able to talk through their differences on that night 15 years ago.

“At the end of the conversation, we stood up, we shook hands, he said he forgave me,” Pizer said. “That just felt amazing. … He forgave me, and I think that is all that is really important.”

Pizer said if Frazier was able to forgive him, the state should be able to too.

“If I am granted a pardon, you won't regret it,” Pizer said during his pardon hearing around five weeks ago. “For the rest of my life, I will be a law-abiding member of society, I will be better able to support my family, and I will contribute only positively to the greater Wisconsin community.

“That is my pledge to you today. I will make you all proud to have given me this second chance.”