The flagship of the Makin Island Amphibious Ready Group returned to San Diego on Monday after seven months at sea,... 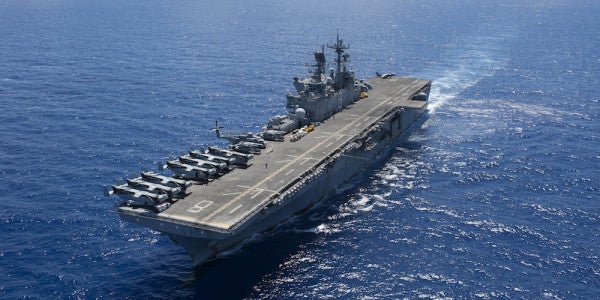 The flagship of the Makin Island Amphibious Ready Group returned to San Diego on Monday after seven months at sea, capping a deployment that included landing Marine artillery in war-torn Syria.

That adds up to almost 1,900 sailors and 2,600 Marines who came home or are on their way to Naval Base San Diego, Camp Pendleton and the Marine air stations in Miramar and Yuma, Arizona.

The Somerset arrived on Thursday. The “Tomcats” of Marine Attack Squadron 311 landed in Yuma on the same day, while the “Ridge Runners” of Marine Medium Tiltrotor Squadron 163 returned to Miramar on Friday.

“Just as Marines have historically been the ‘first to fight,’ the MEU carries on this tradition as the nation’s premier rapid-response forces,” Col. Clay Tipton, commanding officer of the 11th MEU, said in a statement. “The American people would be proud of how their Marines represented our great nation while operating in more than 24 countries.”

When combined, an amphibious readiness group and a Marine expeditionary unit form a self-contained force capable of putting troops ashore and providing them with the needed supplies — flexibility that lets leaders in Washington, D.C. use them to provide humanitarian relief or wage war.

“With all three ships and the Marines embarked — across the Western Pacific and Middle East — it’s important to reassure our regional partners that we’re there to support the free flow of commerce and ensure maritime security,” said Amphibious Squadron 5 commander Capt. Mike A. Crary.

Although the landing of the M-777 Howitzers, their crews and supporting infantry highlighted the deployment by providing fire support to the forces besieging the Syrian city of Raqqa — capital of the jihadist group called Islamic State — the warships and Marines also trained with military members from Japan, Malaysia, Sri Lanka, Papua New Guinea, Djibouti and Oman.

“Probably one of my best memories was Christmas Eve,” said Capt. Mark Melson, commanding officer of the Makin Island. “We did an underway replenishment. We took on 1.4 million gallons of gas. We unloaded 460 pallets and then two hours later we hosted the commandant of the Marine Corps.”

At San Diego’s Pier 13 on Monday, Kentoria Pickett squinted at the sailors manning the rails aboard the Makin Island to locate her husband, Kenneth Pickett II, a Hull Technician 1st Class from Fort Worth, Texas. She was flanked by their 12-year-old son, Kamari, and cradling Kenneth Allen Pickett III, born prematurely on Jan. 24.

“We missed him working on the yard,” said Kentoria Pickett, 32, a Navy operations specialist 1st class who has deployed to Afghanistan and Honduras. “Oh, and the car. But what we missed the most was him.”