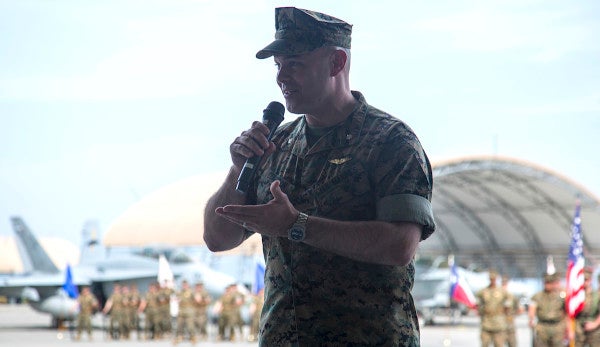 The commanding officer of a Japan-based Marine Hornet squadron has been relieved four months after a midair refueling collision left six people dead.

No additional information about the decision was immediately available. The move was a “direct result of decisions made that may have beenrelated to the fatal collision,” according to Marine Corps Times.

An F/A-18D Hornet assigned to the all-weather squadron and a KC-130Hercules collided in midair Dec. 6 off the coast of southern Japan. The accident occurred during regularly scheduled training, Marine officials said at the time.

The two Marines aboard the Hornet at the time of the crash were recovered shortly after the accident.Capt. Jahmar Resilard, a pilot, later died at the hospital. A second Marine was injured.

The cause of the collision remains under investigation.

In December, Compton said “the Bats” were deeply saddened by the loss of Resilard.

“He was an effective and dedicated leader who cared for his Marines and fellow fighter pilots with passion,” Compton said in a release after Resilard's death. “His warm and charismatic nature bound us together, and we will miss him terribly.”

Compton is a Naval Academy graduate who'd previously deployed to Iraq with Marine All-Weather Fighter Attack Squadron 242. He has flown more than 2,700 mishap-free flight hours in the F/A-18D Hornet, according to his Marine Corps bio.