Editor’s Note: This article by Gina Harkins originally appeared on Military.com, the premier source of information for the military and veteran community. The former... 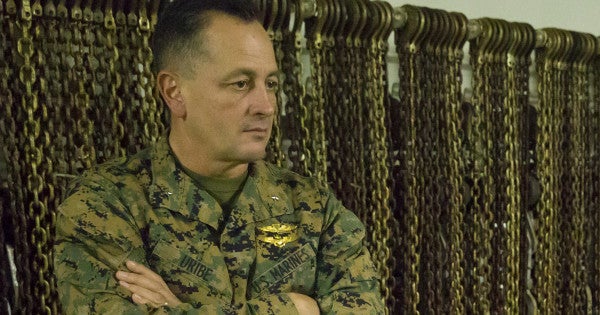 The former inspector general of the Marine Corps has been reprimanded for using his aide for personal errands during an Iraq deployment, Military.com has learned.

“We take all allegations of misconduct seriously,” Little said.

While serving as director of the Combined Joint Operations Center, Baghdad, Uribe was found to have violated the Joint Ethics Regulation when he requested or allowed his aide to pick up his laundry, remove his bedsheets, reserve his gym equipment, and provide him with snacks and meals.

Related: A Marine General Made His Aide Do His Laundry, Pick Up His Meals »

Uribewrote in the investigation that he “lost focus” during a challenging deployment.

“Where I would never think to engage in these activities in garrison, in the fog of the combat zone, it seemed acceptable somehow,” he added.

Since Uribe's punishment was administrative in nature, it is protected under the Privacy Act so no additional details were provided, including who carried out the punishment. Uribe is currently the deputy commander of I Marine Expeditionary Force, which falls under MARFORPAC. Lt. Gen. David Berger is head of that command.

Uribe also repaid his subordinates after he was found to have accepted gifts from them, including about $100 worth of coffee and chocolates from a lieutenant colonel and personal loans and prepaid haircuts from his aide.

“Brig. Gen. Uribe made a personal choice to voluntarily provide repayment in order to address concerns of any perception of impropriety raised by the report,” said 1st Lt. David Morris, a spokesman for I MEF.

A DoD investigation into Uribe's behavior followed a June 2017 complaint that he treated his aide-de-camp, an unnamed female officer, like a servant. The general officer was previously responsible for investigating such claims for the Marine Corps when he served as its inspector general from September 2015 to May 2016.

Uribe, through a spokesman, declined to answer additional questions about the report, including whether it has changed his leadership style.

In the investigation, Uribe wrote that while he found some of the substantiated allegations “not justified,” he said he “learned a great deal from this process.”

“[I] will be much more attentive to these issues in the future,” he wrote.