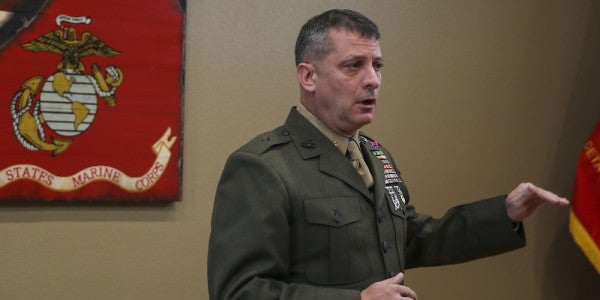 The one-star director of Marine and Family Programs has been placed on administrative leave after an anonymous complaint was made regarding “inappropriate comments” during a recent town hall meeting.

Marine Corps Commandant Gen. Robert Neller placed Brig. Gen. Kurt Stein on leave pending the outcome of an inquiry into the alleged comments, according to a news release from Marine Corps Headquarters. The specific nature of the comments was not revealed.

USA Today reported that Stein told an audience of hundreds of Marines and civilians that recent allegations of sexual harassment made by women against a Marine officer were “fake news.” The newspaper said he used “crass language” to describe the charges.

According to the release, the alleged comments were made during an April 6, 2018, town hall discussion. Following the town hall, someone made an anonymous complaint to a Naval Criminal Investigative Service tip line.

“The Marine Corps expects every Marine, uniformed and civilian — and particularly those in leadership positions — to take allegations of misconduct seriously and to promote positive command climates,” Marine Corps spokesman Maj. Brian Block said in a news release. “As a Corps, we are committed to fully investigating and holding ourselves accountable when those allegations are shown to be true.”

Block added that Marine leaders are responsible to ensure that subordinate Marines and civilian employees are confident they will be taken seriously if they come forward with allegations of misconduct.

Stein, a decorated career naval aviator, came to his current position in November 2016.

According to his official biography, he entered the Marine Corps in 1991 and has flown more than 100 combat missions and logged more than 4,500 flight hours on various platforms. He previously served as the assistant deputy commandant for aviation, and as vice chief of staff for Marine Forces Reserve and Marine Forces North.

Stein's suspension comes a little more than a month after Neller suspended another one-star general, Brig. Gen. Norman Cooling, after Defense Secretary Jim Mattis received a request from Congress to investigate his behavior.

Cooling, the legislative assistant to the commandant, was alleged to have created a hostile work environment. He was suspended Feb. 28; no further actions have been announced.